How accurate is our mental image of ourselves?

Browse the article How accurate is our mental image of ourselves? 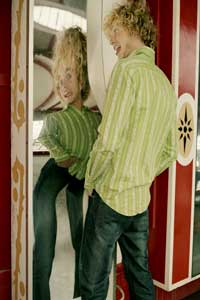 What we see in the mirror can be different from what others perceive when they look at us. See more pictures of emotions.
West Rock/Getty Images

When you look at yourself in a mirror, what you see depends on the quality of that mirror. Similarly, our mental images of ourselves help determine how we react to daily highs and lows of life. If we think of ourselves as worthwhile and valued, that quality will come across to other people. Molded by both internal and external forces, our self-image makes a huge difference in how we feel and act.

Think about how you would describe yourself to a stranger. Would you emphasize your keen sense of humor or physical features you're fond of? Or would you spend more time on supposed "trouble spots?" Your answer largely depends on your mental image of yourself.

Why does it matter how you see yourself? Keeping our bodies healthy through proper diet and exercise improves how we feel physically and enhances our quality of life. Our mental wellness is equally vital for attaining personal fulfillment. A healthy state of mind fosters a positive self-image, which then encourages balanced relationships and sound decision-making skills [source: American Psychological Association]. But a healthy body and mind don't operate independently -- we should nurture both because they affect each other.

If all of this sounds a little too Zen for your taste, consider this. In a study of teenage girls' self-image, participants who rated themselves as socially unpopular were 69 percent more likely to gain weight than those who considered themselves popular [source: Psychiatric Annals]. Other research has found that people with a positive self-image are less likely to engage in unprotected sex as well.

What are the elements that create our self-image? Focus often turns to how we compare our bodies to ideal physiques. But body image is just one part of the complete picture. Our personal experiences, relationships, choices and attitudes all contribute to the whole. It's essentially how we evaluate our strengths and weaknesses, as well as how we define our character.

To get a better understanding of this mind-body connection, let's take a closer look at one of the most measurable facets of our mental picture: body image. 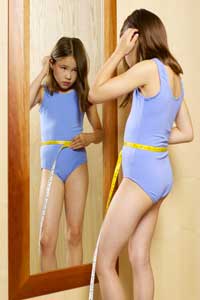 For people with Body Dysmorphic Disorder (BDD), whenever they look in the mirror, they see something terribly wrong. It could be any sort of perceived flaw, such as a large nose or hips. This skewed body image causes them to obsess over their imperfections and often accompanies depression, obsessive compulsive disorder (OCD) and other psychological problems. Researchers suspect that chemical imbalances in the brain, combined with psychological and cultural influences, are at the root of BDD.

­Although study samples indicate that BDD affects only a small portion of the population, research shows that many people are dissatisfied with their bodies. Fretting over weight is a common psychological issue for females, beginning at a young age. In fact, the term normative discontent was coined in the 1980s by researchers who found widespread negative body image, particularly among women in the United States. Studies have shown that as many as 46 percent of girls worry about their size [source: Presnell, Bearman and Madeley]. Males, on the other hand, strive toward a muscular ideal physique that celebrates bulky over bony. Reflecting that cultural trend, underweight boys exhibit the lowest satisfaction with their bodies, compared to average-sized and overweight male peers [source: Presnell, Bearman and Madeley].

The messages we receive from media, friends and family all play different roles in shaping our body images. Age-wise, adolescents and teens are the most susceptible to negative body images [source: Columbia University]. Young people who are unhappy with their bodies are more prone to eating disorders and depression as well [source: Presnell, Bearman and Madeley].

More than a third of Americans are obese or overweight, and as the Body Mass Index (BMI) climbs, so does body dissatisfaction. Although Caucasians statistically report higher levels of body dissatisfaction, people with steep BMIs from many ethnic groups harbor poor body images as well. A study conducted by the Center for Obesity Research and Education at Temple University found that obese and overweight youth from multiple ethnicities were all unhappy with their physical appearance [source: Temple University].

But body dissatisfaction doesn't split evenly between the sexes. Studies have consistently found that women are more likely than men to have a negative body image. Ninety-one percent of cosmetic surgery patients in 2007 were women [source: American Society for Aesthetic Plastic Surgery]. Women are also more likely than men to want to alter their bodies later in life [source: Ferraro et al].

This isn't to say that men are immune to body dissatisfaction. As with women, evidence suggests that men in Western countries are held to higher physical standards of attractiveness than Eastern countries. In comparison to Taiwanese men, for example, American men feel they must become 10 pounds (4.5 kilograms) more muscular to attract females [source: The Atlantic Monthly].

Positive body image, on the other hand, has been shown to have more upbeat connotations. For instance, women with healthier body images and self-images report more sexual satisfaction and confidence with their partners [source: Ackard, Kearney-Cooke and Peterson]. In addition, for male and female college students, positive body image correlated to heightened optimism, self-esteem and strong relationships.

The facts are clear: What's going on inside of us can influence our perception on the outside. So what type of external forces can shake the accuracy of our self-image? Perhaps more importantly, how can we protect and enhance a positive mental image of ourselves? 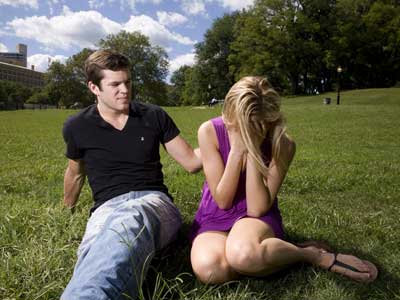 Poor self-image can have a negative impact on relationships, while unhealthy relationships can negatively affect one's self-image.
Rachel Watson/Getty Images

A recent poll conducted by the American Psychological Association found that one-third of Americans are extremely stressed out. Finances and work were the top stressors, leading to increased health problems, bad relationships and reduced productivity. Forty-one percent of people under such high levels of stress recognized a negative impact on their self-image [source: APA].

Positive self-image may help people manage work-related stress loads. Employees with good self-esteem and emotional stability generally have more motivation to perform well at work. On the other hand, research has shown that people with a negative body image have poorer work performance, lower quality of life and worse relationships [source: Judge, Erez and Bono].

Speaking of relationships, they can also significantly affect how we see ourselves and measure our self-worth. From birth, messages we receive from parents or guardians can go a long way to reinforce a positive sense of self or tear us down. Women in psychologically abusive romantic relationships exhibit more signs of lower self-esteem, for instance [source: Pipes and LeBov-Keeler]. Numerous studies have highlighted the diminished sense of self that sexual abuse victims undergo as well.

At this point, it should be pretty clear that an accurate, healthy mental image of yourself has positive results in your life. Your health and physical fitness are tied to that, but there are other factors everyone must deal with. So how can we adjust our mental lens to reap those benefits?

First, you have to be honest with yourself. Everyone has hang-ups and baggage that can skew our identities. To get to the root of those rough spots, it may help to talk to a counselor, psychologist or even a good friend to better understand how you think about yourself. From there, learn to acknowledge and appreciate your assets and assess your weaknesses. As we've learned, the mind and the body often function symbiotically, so taking proper physical care can also improve your mindset. Eating right, getting adequate sleep and exercising will help balance the chemicals and hormones in our bodies associated with stress and anxiety. By altering your self-image to honor your value as a person while treating your body with TLC, you'll be on your way feeling better in body and spirit.