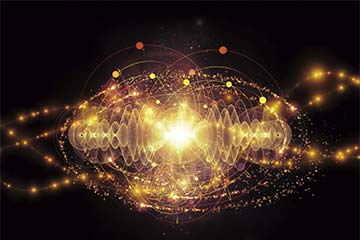 Does light weigh anything? Well, yes and no.
agsandrew/iStock/Thinkstock

If there were a simple answer to how much light weighs, we'd all know it. There would probably be some sort of elementary school rhyme to help us remember the exact figure, much like our useful little ditty about 1492 and the ocean blue.

Instead, we are forced to wade through complicated half-answers that go something like, "Um, it kind of weighs a little, but not like how regular things weigh." Which is a terrible jingle to sing on the playground.

Let's try to un-muddle the mess and start by asking a different question altogether: Do photons have mass?

Photons are the smallest measure of light, and no, they don't have mass. So that's easy, right? Light is composed of photons, which have no mass, so therefore light has no mass and can't weigh anything.

Not so fast. Because photons have energy -- and, as Einstein taught us, energy is equal to the mass of a body, multiplied by the speed of light squared. How can photons have energy if they have no mass? (One imagines Einstein thinking about photons re: mass and shrugging, hoping that nobody noticed the discrepancy.)

Actually, what Einstein was proving is that energy and mass could be the same thing -- all energy has some form of mass. Light may not have rest (or invariant) mass -- the weight that describes the heft of an object. But because of Einstein's theory (and the fact that lightbehaves like it has mass, in that it's subject to gravity), we can say that mass and energy exist together. In that case, we'd call it relativistic mass -- mass when an object is in motion, as opposed to at rest [source: Gibbs].

So our answer is a grab bag of yeses and nos. Does light have a mass that can be weighed on the bathroom scale? Most certainly not. But it is a source of gravitational fields, so we could say that a box of light weighs more than a box without light -- as long as you're comfortable understanding that the "weight" you're measuring is a form of energy and not, say, pounds or kilograms [source: Ask the Van].

Author's Note: How much does light weigh?

Understanding the relationship between light and mass and photons and energy is daunting. It's enough to make one wish Einstein could patiently walk us through it himself.

How Autopsies Work
Tungsten's Boiling Point Is 10,030 F and Other Crazy Facts
Do a Person’s Fingerprints Change After Death?