What Does Luminol Do? 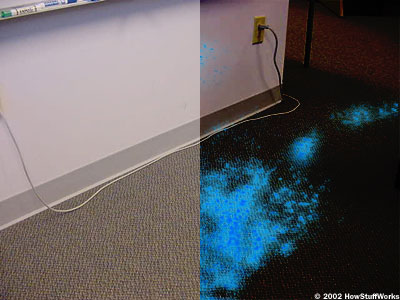 Much of crime scene investigation, also called criminalistics, is based on the notion that nothing vanishes without a trace. This is particularly true of violent crime victims. A murderer can dispose of the victim's body and mop up the pools of blood, but without some heavy-duty cleaning chemicals, some evidence will remain. Tiny particles of blood will cling to most surfaces for years and years, without anyone ever knowing they're there.

The basic idea of luminol is to reveal these traces with a light-producing chemical reaction between several chemicals and hemoglobin, an oxygen-carrying protein in the blood. The molecules break down and the atoms rearrange to form different molecules (see Microsoft Encarta: Chemical Reaction for more information on chemical reactions). In this particular reaction, the reactants (the original molecules) have more energy than the products (the resulting molecules). The molecules get rid of the extra energy in the form of visible light photons. This process, generally known as chemiluminescence, is the same phenomenon that makes fireflies and light sticks glow.

Investigators will spray a suspicious area, turn out all the lights and block the windows, and look for a bluish-green light. If there are any blood traces in the area, they will glow.