Marijuana in the Body 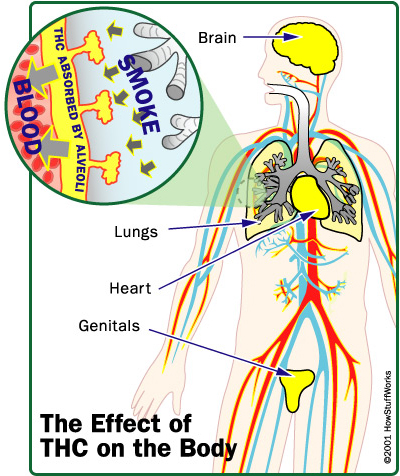 Every time someone smokes a marijuana cigarette or ingests marijuana in some other form, THC (delta-9-tetrahydrocannabinol) and other chemicals enter the user's body. The chemicals make their way through the bloodstream to the brain and then to the rest of the body. The most powerful chemical in marijuana is THC, which is primarily responsible for the "high" associated with the drug.

The most common way to use marijuana is to smoke it (more on how people do that later). Smoking is also the most expedient way to get the THC and other chemicals into the bloodstream. When a person inhales smoke from marijuana, the THC goes directly to the lungs. Your lungs are lined with millions of alveoli, the tiny air sacs where gas exchange occurs. These alveoli have an enormous surface area -- much greater than that of your skin -- so they make it easy for THC and other compounds to enter the body. The lungs absorb the smoke just seconds after inhalation. Vaporizers, which heat the cannabis sufficiently to vaporize its active ingredients without burning it, provide an inhalable alternative to smoking.

You can also eat marijuana. In this case, the marijuana enters the stomach, and the blood absorbs it there. The blood then carries it to the liver and the rest of the body. The stomach absorbs THC more slowly than the lungs. When users eat marijuana, the levels of THC in the body are lower, but the effects last longer. Some people who use marijuana therapeutically drink it in tea, but the process tends to dilute the amount of THC available for absorption [source: Gieringer and Rosenthal]. Since Colorado voted to ease its marijuana laws, the state has seen an uptick in the number of kids accidentally ingesting pot brownies, cookies, candies and drinks [source: Kelly].