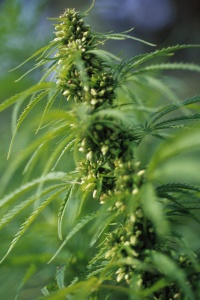 The history of marijuana use reaches back farther than many would guess. Cultivation of the plant dates back thousands of years. The first written account of cannabis cultivation (ostensibly used as medical marijuana) is found in Chinese records dating from the 28th century B.C.E. And a nearly 3,000-year-old Egyptian mummy contained traces of THC, the main psychoactive chemical in marijuana, as well as other drugs [source: Parsche and Nerlich].

Cannabis sativa is perhaps the world's most recognizable plant. Pictures of the ubiquitous, green cannabis leaf show up in the news media, textbooks and drug-prevention literature. Its shape is made into jewelry, plastered on bumper stickers and clothing, and spray-painted on walls. The leaves are arranged palmately, radiating from a common center, like the fingers of a hand spreading apart. Although most people know what the cannabis plant looks like, they may know very little about its horticulture.

Believed to be a native plant of India, Cannabis sativa possibly originated in a region just north of the Himalayas. It's an herbaceous annual that can grow to a height of 8-12 feet (4 to 5.4 meters), with reports as high as 20 and 25 feet (the indica variety tends to be squatter). The plant has flowers that bloom from late summer to mid-fall, when grown outdoors. Of course, plenty of people grow cannabis indoors, too. (See How Grow Houses Work for more information.)

Cannabis plants usually have one of two types of flowers, male or female, and some plants have both. Male flowers grow in elongated clusters along the leaves and turn yellow and die after blossoming. Female flowers grow in spike-like clusters and remain dark green for a month after blossoming, until the seed ripens. Hashish, which is more potent than marijuana, is made from the resin of the cannabis flowers.

As we mentioned, marijuana plants contain hundreds of chemicals, 109 of which fit into a category called cannabinoids [source: Mehmedic et al.]. THC, of course, is one of these cannabinoids, and it's the chemical most often associated with the effects that marijuana has on the brain. The concentration of THC and other cannabinoids varies depending on growing conditions, plant genetics and processing after harvest. You'll learn more about the potency of THC and the toxicity of marijuana next.

The two parts of the marijuana plant's stiff, fibrous stalk -- the hurd and the bast -- can be used to make lots of products. The bast provides fibers, also called hemp, that are woven to create canvas, which has been used to make ship sails for centuries.

The hurd provides pulp to make paper, oil to make paints and varnishes, and seed for food. Marijuana plants produce a high-protein, high-carbohydrate seed that is used in granola and cereals. Hemp oil and seed contain only trace amounts of psychoactive chemicals. In the U.S., owning hemp products, such as hemp rope or a hemp shirt, is legal.