The Tower of Math: Branches of Mathematics 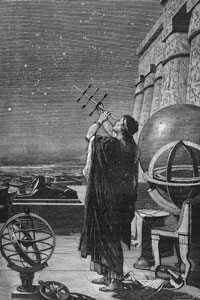 Who would you hire to build a tower? After all, several different systems converge in modern construction: steel framework, stone foundation, woodwork, plumbing, roofing, electrical wiring, telecommunications heating and air conditioning. Likewise, many branches of mathematics play a part in the tower of math. Here are just a few.

Arithmetic: This is the oldest and most basic form of mathematics. Arithmetic chiefly concerns the addition, subtraction, multiplication and division of real numbers that aren't negative.

Algebra: The next level of mathematics, algebra, is essentially arithmetic with unknown or abstract quantities thrown in with the real numbers. We represent the abstracts with symbols, such as X and Y.

Geometry: Remember what we said about math helping us navigate a world of numerous and movable objects? This is where geometry comes into play, dealing chiefly with the measurements and properties of points, lines, angles, surfaces and solids.

Trigonometry: Trigonometry concerns the measurements of triangles and the relationships between their sides and angles. While the historical origins of arithmetic, algebra and geometry are lost in the fog of ancient history, trigonometry originates with second century astronomer Hipparchus of Nicaea.

Calculus: Independently developed by both Isaac Newton and Gottfried Leibniz in the 17th century, calculus deals with the calculation of instantaneous rates of change (known as differential calculus) and the summation of infinite small factors to determine some whole (known as integral calculus). As such, it has proven a vital scientific tool in a number of disciplines.

The tower of mathematics has enabled human culture to rise and flourish, to understand both the inner mysteries of the cells to the outer mysteries of space.

But did we truly build this tower out of our own ingenuity? Did we invent mathematics or merely discover it? Explore this tantalizing question on the next page.