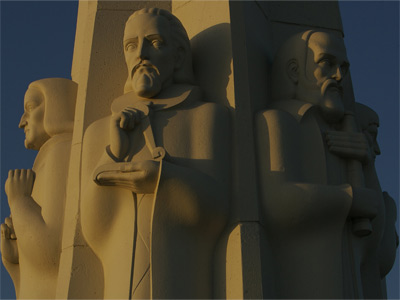 Without these three -- (L to R) Isaac Newton, Johannes Kepler and Galileo on the Astronomers Monument at the Griffith Observatory in Los Angeles -- where would science be?
Stephen Dunn/­Getty Images

­Sir Isaac Newton is considered one of history's great polymaths, having contributed to the fields of mathematics, physics, astronomy, theology, chemistry and biblical history. In some ways, he was a stereotypical genius -- deeply absorbed in his work, sometimes forgetting to eat or teach his classes, disheveled in appearance, hardly sleeping. But Newton was also highly competitive, temperamental and sometimes ruthless. And despite the popular image of him as rationalism personified, Newton was also highly religious and deeply immersed in the studies of myth and alchemy.

Born in 1643, Newton came from a family of moderately successful farmers, although his father, also named Isaac, was illiterate and died before the younger Isaac was born. Consequently, the future scientist had a difficult childhood. Unappreciated by his stepfather, Newton was forced to live with his grandmother until his stepfather died, when he was reunited with his mother.

­Newton never married and had few close friends in a relatively long life. (He died at age 84.) He suffered from his intense devotion to his studies, experiencing more than one nervous breakdown. It took him several years to recover from his first breakdown in 1675, which was followed by the subsequent shock of his mother's death. However, he did inherit a sizable estate from her, allowing him financial independence.

The legendary scientist held many notable positions in his lifetime, among them:

His professional life, though, was not without challenges, and he had many critics and competitors throughout his career. Yet despite the controversy he sometimes engendered, by the time he died, Newton was a celebrated scientist and thinker throughout Europe. He died a wealthy man and had a lavish funeral ceremony at Westminster Abbey, where he's buried.

­In this article, we'll explore all sides of Isaac Newton -- from his search for the fabled philosophers' stone to his groundbreaking work on calculus and gravitation. We'll look at why he set out to ruin the reputation of one of his peers and how his work changed the very nature of scientific inquiry.