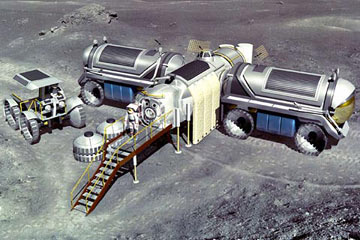 An artist's concept of what an early lunar base might entail. See more moon pictures.
Image courtesy NASA

So far, the moon has proven to be a terribly difficult place to visit, but we'd really love to live there. Despite years of planning, we haven't so much as set foot on it in decades -- much less established a permanent base of operations.

Yet the benefits of a lunar colony would be many. A moon base would serve as the first step toward ensuring the long-term survival of the human race -- toward exploring and colonizing farther reaches of the universe. It would provide a foothold from which to improve our spaceflight technology, explore the lunar surface and expand our scientific understanding.

Furthermore, the advent of lunar industry could provide increased energy production from, say mining helium-3 or collecting solar energy, and efficient spacecraft construction, as well as serving as both an economic boost and a unifying venture for the whole of humanity. (On the other hand, the moon's resources could always supply another excuse for nations to argue with one another.)

Industry, economics and unification of the human race are all great reasons set up camp on the moon, yet none of them has propelled the construction of a permanent operation, such as the U.S. Army's 1959 plans for a lunar military outpost or the former Soviet Union's proposed DLB Lunar Base plans in 1962 (and both of those had the additional fuel of Cold War nationalism). More recently, NASA's scaled-back 2006 plans for crude lunar "camping" shelters obviously didn't come to fruition either.

The holdup comes down to two factors: technology and will.

From a purely technological standpoint, we know we can reach the moon. We also possess the technological prowess to begin building there, enabling the scope and scale of lunar activities to evolve.

Most experts, however, believe that our methods of reaching the moon have to become more cost-efficient and energy-effective to facilitate large-scale operations there. This means developing both an improved heavy-lift vehicle for large cargo, as well as perfecting cheaper, faster vehicles for smaller-scale missions such as site scouting, technology testing and individual experiments.

Such advancements, however, still require a great deal of effort, which means they require significant financial support. For private industries, this necessity requires the potential for short- or long-term profit. For government space programs, it requires significant political support and, most often, the underlying support of the country's population.

In early 2010, economics and politics in the United States indefinitely postponed NASA's latest plans for a moon base. Later that year, however, the Japan Aerospace Exploration Agency (JAXA) unveiled plans to establish an unmanned lunar base by 2020. In the private sphere, however, Google's Lunar X Prize competition continues to advance small-scale lunar spacecraft technology.

Reaching the moon is arguably one of humanity's greatest achievements and thus far the pinnacle of our travels into the mysteries of space. Time will tell exactly when and how we muster the willpower and develop the technology to surpass it. 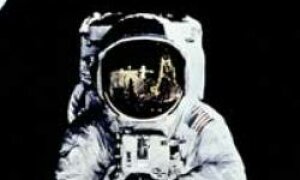