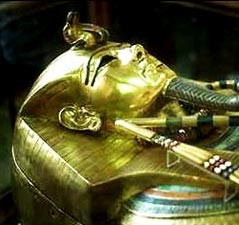 As the Egyptian concept of the afterlife evolved, they began to use more and more elaborate coffins and tombs to protect and honor the dead.

After the embalmers removed the organs and re-stuffed the body, they laid the body down on a sloped board and covered it completely with natron powder. The Egyptians collected this powder, a mixture of sodium compounds, from the shores of Egyptian lakes in the desert west of the Nile Delta. Unlike the hot sand that dried the earliest Egyptian mummies, the salty natron absorbed moisture without severely darkening and hardening the skin.

The embalmers left the body in the powder for 35 to 40 days to allow enough time for the body to dry completely. During this waiting period, somebody had to stand guard, as the body's strong odor attracted desert scavengers. After the 40 days were finished, the body was brought to the Wabet, the "House of Purification." The embalmers removed the incense and other stuffing from the body cavity and refilled it with natron, resin-soaked linen and various other materials. In some eras, to make the desiccated body more lifelike, the embalmers also stuffed material under the skin in the arms, legs and head. When the body was fully stuffed, the embalmers sewed up the incisions and covered the skin with a resin layer in order to keep moisture out. The body was then ready for the wrapping, or bandaging, procedure.

Bandaging was a very involved process, and it typically took a week or two to complete. While the deceased was drying in the desert, his or her family gathered roughly 4,000 square feet (372 sq. meters) of linen and brought it in to the embalmers. The wealthy sometimes used material that had clothed sacred statues, while the lower classes collected old clothing and other household linen. When the linen was delivered, the embalmers selected the highest-quality material and stripped it into long "bandages" measuring 3 to 8 inches across.

The embalmers then wrapped the body in a shroud and began methodically winding the bandages around the different parts of the body. Typically, they started with the hands and feet, wrapping all of the fingers and toes individually, and then moved on to the head, arms, legs and torso. Once all the parts of the body were wrapped, the embalmers began wrapping the body as a whole. As they applied new layers, the embalmers coated the linen with hot resin material to glue the bandages in place. During this entire process, the embalmers uttered spells and laid protective amulets on the body (for protection in the next world), wrapping them up at different layers.

The Egyptians may have bandaged their mummies for a number of different reasons:

After the mummy was fully wrapped, the embalmers attached a rigid cartonnage cage to the body and affixed a funerary mask to the head. This new face, which was either a likeness of the deceased or a representation of an Egyptian god, played an important role in the passage to the afterlife. It helped the spirit of the deceased find the correct body among the many Egyptian tombs.

When the mummy was completed, it was housed in a suhet, a coffin decorated to look like a person. The suhet was brought to the tomb in a procession of mourners. At the tomb, the priest, dressed as the jackal god Anubis, performed the "ceremony of the mouth," a ritual in which sacred objects were touched to the suhet's face, giving the deceased the powers of speech, sight, touch, hearing and taste in the next world. The suhet was then leaned against the wall inside the tomb, where it was sealed up with all the food, furniture and supplies that the deceased would need in the next world.

The best preserved bodies are from the middle period of Egyptian mummification. In later years, Egypt was flooded with outsiders who also wanted to be mummified in the traditional way. With this high demand, and the desire to bring in some money, the Egyptian embalmers began to pay more attention to the mummy's outer appearance than its inner preservation. Most of these rushed mummies quickly decomposed inside their ornate tombs, but the customers were none the wiser.