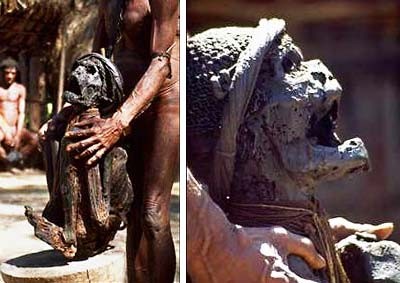 The ancient Egyptians are the most famous mummy-makers, but they were not the only ancient civilization, or even the first, to preserve their dead. The Chinchorro people of northern Chile developed a mummification process around 5000 B.C., some 2,000 years before the Egyptians. These mummies, the oldest in the world, are nothing like the famous Egyptian figures. The Chinchorros dismembered and disemboweled the body completely, then attached the pieces back together using straw, plant fibers and stick. They then covered this frame with black mud, which they sculpted into a human form with a face and other ornamentation.

The resulting mummies are a strange hybrid of a corpse and a statue. It's unclear what the motivation behind this practice was, but many researchers believe it did not have to do with any concept of an afterlife. The mummies show signs of wear, and even repainting, indicating they were kept in households as statues for some time before being buried. This practice indicates that the mummies were created more for the sake of the deceased's family and friends, rather than for the good of the deceased. The Chinchorro people probably kept the mummies around as a way to honor and remember the dead, to help them mourn the loss.

Some later South American cultures also produced mummies, both by artificial and natural means. In the mountains of Peru, scientists have uncovered many Incan bodies preserved by the dry atmosphere and extremely cold temperatures. Even though the mummifying agent is completely natural, these mummies are, in a sense, man-made -- they were deliberately brought to the remote location with the understanding that the bodies would be preserved there. The Incans sacrificed children and took the bodies to these high points as an offering to their gods.

Some of the most amazing mummies have been found in China. Lady Cheng, a Chinese aristocrat who lived over 2,000 years ago, is the best-preserved ancient mummy in the world. She was laid to rest immersed in a special embalming fluid that kept her tissue relatively soft. Her body and some of her possessions were protected by a series of nested coffins housed in an airtight tomb. Chinese scientists have not studied her in detail, so they still don't know exactly how she was preserved. The embalming fluids seem to have a mercury component to them, which may have been one of the keys to her preservation.

When we think of mummies, we typically imagine bodies preserved from ancient times. But as we'll see in the next section, the practice of mummification continues today. Some of the most amazing mummies have been produced in the past hundred years.