Mustard Gas in World War I 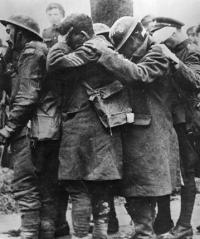 During World War I, a new style of fighting known as trench warfare pitted two armies close enough to each other that they could yell across the lines. But soldiers rarely ventured into the area between the two trenches commonly referred to as no man's land for fear of being gunned down, and battles would often settle into a stalemate. Chemical agents such as mustard gas became a way to break that uneasy deadlock.

Germany's first attempt at chemical weapons came in 1915 at the battle of Ypres in Belgium, in the form of chlorine gas. The gas cleared large sections of soldiers from the front lines, who fled once exposed, and ultimately killed 5,000 opposing troops [source: Encyclopaedia Britannica]. Chlorine gas burns the throats of its victims and causes death by as­phyxiation, much like smoke kills people during a house fire.­

The Germans used mustard gas for the first time during war in 1917. They outfitted artillery shells and grenades with mustard gas that they fired in the vicinity of the troop target. After encountering several attacks, the Allies referred to mustard gas as Hot Stuff or H.S., eventually dropping the S and just referring to it as H. By the end of the war, more than two dozen chemical agents had injured 1 million soldiers and civilians, killed 100,000 people and earned the well-deserved title of weapons of mass destruction [source: Encyclopeadia Britannica].

When you first encounter mustard gas, you may not even know anything is about to affect you. The best way to detect mustard gas is through smell. Like your experience in the opening section of this article, soldiers exposed to mustard gas had a hard time detecting a gas attack but noticed a funny smell. Even under heavy doses, however, their noses adapted to the smell quickly, giving them the impression that the gas had dissipated. Have you ever noticed you can't smell something, be it good or bad, after you've been sniffing it for a few minutes? The same principle applies during a mustard gas attack.

So one of the most dangerous aspects of mustard gas doubles as one of its most desirable attributes as a weapon. We know mustard gas is difficult to detect unless you're under a direct attack. It's even harder to notice in contaminated areas where the gas has settled. That posed a problem for soldiers walking through an exposed area that underwent an attack say two days earlier. The chemical agent would stay in the ground for weeks, depending on the temperature. The colder the ground, the longer the mustard gas would linger.

At the time the Germans began using the chemical, gas masks proved useless because mustard gas could penetrate the filters and mask housing. Not only that, but chemical suits hadn't been used yet, so mustard gas had the whole body to attack. And a little went a long way. One drop of the chemical weapon could cause skin burns on people within 10 cubic meters [source: Ward].

Mustard gas harmed and killed soldiers by the thousands and affected battle lines. Because of this versatility, mustard gas served as the most desirable chemical agent during World War I for both sides.

So what happens when you're exposed to mustard gas? You'll find out next.