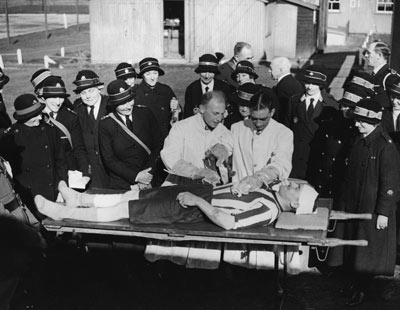 Old-school doctors demonstrating how patients contaminated by mustard gas are washed as soon as they reach the hospital.
Getty Images

After a mustard gas attack, you might think nothing more about it for a few hours or even a day. But eventually you would see red spots forming on your skin that quickly turned into painful blisters. If you underwent a direct attack and inhaled mustard gas, it wouldn't take long to feel pain and swelling in your nose and throat as the blisters developed, sealing your airway.

The longer the exposure to mustard gas, the greater the damage it causes. Conversely, if you had a brief encounter, your body would heal faster, giving you a greater chance for survival. In some cases, victims experiencing multiple exposures develop hypersensitivity to the deadly chemical agent.

You might experience some of the following symptoms after you inhaled or touched mustard gas [source: Centers for Disease Control]:

Some of the more serious respiratory symptoms would take even longer to surface, needing anywhere from 24 to 48 hours to appear. This latent period played havoc with soldiers exposed during the war, rendering troops incapacitated, filling infirmaries, taking up valuable human resources, bogging down reinforcements and generally demoralizing soldiers.

Make no mistake, mustard gas can be lethal. But it doesn't kill quickly. Rather fatalities primarily result from secondary broncho-pneumonia. Approximately 2 percent of all casualties who wore a respirator died from their injuries in World War I, compared to a death rate of 50 percent of those exposed without a respirator [source: The Medical Front]. The highest number of fatalities occurred after the third or fourth day of exposure, with the most extreme cases taking up to three to four weeks [source: The Medical Front].

After an exposure to mustard gas during World War I, military doctors couldn't purge the effects of mustard gas in the body. Medical staff could treat the skin with ointments consisting of bleaching powder and white petroleum jelly and flush the eyes with saline solution, which helped some. For the more severe respiratory symptoms, medics treated patients with a menthol solution soaked into gauze administered through a metal breathing mask. This treatment alleviated dry cough but didn't cure the bronchial infection. For the most severe casualties, medics quarantined the affected patients and hoped for the best. In the end, early detection proved to be the best way to defend against the most serious respiratory effects.

When the Allies learned what they faced during a mustard gas attack, they quickly developed safety measures to limit casualties. The most significant breakthrough came with improved respirators. An adequate respirator protected the face and eyes using a sealed hood and clear glass to cover the head and face, but that still left the rest of the body exposed. Chemical suits didn't hit the scene until after World War I.

If you survived a serious mustard gas attack, you came out as one of the lucky ones. Maybe you lost your eyesight and even your voice, but you survived. Is the chemical agent still a wartime threat? Find out next.