The World of Nanotechnology 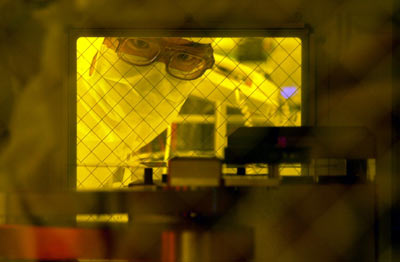 An engineer prepares a silicon wafer in an early stage of microchip production.
Sam Yesh/AFP/Getty Images

­Experts sometimes disagree about what constitutes the nanoscale, but in general, you can think of nanotechnology dealing with anything measuring between 1 and 100 nm. Larger than that is the microscale, and smaller than that is the atomic scale.

Nanotechnology is rapidly becoming an interdisciplinary field. Biologists, chemists, physicists and engineers are all involved in the study of substances at the nanoscale. Dr. Störmer hopes that the different disciplines develop a common language and communicate with one another [source: Störmer]. Only then, he says, can we effectively teach nanoscience since you can't understand the world of nanotechnology without a solid background in multiple sciences.

One of the exciting and challenging aspects of the nanoscale is the role that quantum mechanics plays in it. The rules of quantum mechanics are very different from classical physics, ­which means that the behavior of substances at the nanoscale can sometimes contradict common sense by behaving erratically. You can't walk up to a wall and immediately teleport to the other side of it, but at the nanoscale an electron can -- it's called electron tunneling. Substances that are insulators, meaning they can't carry an electric charge, in bulk form might become semiconductors when reduced to the nanoscale. Melting points can change due to an increase in surface area. Much of nanoscience requires that you forget what you know and start learning all over again.

So what does this all mean? Right now, it means that scientists are experimenting with substances at the nanoscale to learn about their properties and how we might be able to take advantage of them in various applications. Engineers are trying to use nano-size wires to create smaller, more powerful microprocessors. Doctors are searching for ways to use nanoparticles in medical applications. Still, we've got a long way to go before nanotechnology dominates the technology and medical markets.

In the next section, we'll look at two important nanotechnology structures: nanowires and carbon nanotubes.

It's a Small World After All