How big can hail get (and how is that even possible)? 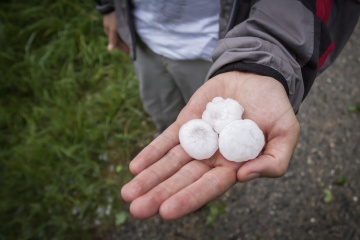 You don't want to play golf with this, nor do you want it falling on your car.
Florent_Courty/iStock/Thinkstock

Say you don't live in the tropics, or even in a nicely temperate zone where your garden can reliably sprout tomatoes during a lengthy growing season. Say instead you must eke out fresh produce during a severely truncated summer in a northern location like, for instance, Alberta. The answer to your problem, of course, is a greenhouse. So, you invest a few thousand dollars in an aluminum-and-plastic structure, and before you know it, heirloom tomatoes are spiraling upward, flowering and fruiting and generally promising an abundant harvest.

Then comes July. High summer. One day, a tremendous thunderstorm passes over. Exciting! You love lightning. But then, white bullets fire down from the heavens. Golf balls made of ice. It's hail.

When you dare to go outside again, your windshield is shattered, your trees have been de-limbed, your beautiful new greenhouse is in tatters and the tomato plants inside it are corpses.

Did you forget that Alberta is in the so-called "Hail Alley"? Your insurance company didn't. If you heard a droning sound before the storm, that was a fleet of planes taking off and flying straight into the gathering thunderclouds. Their mission? To cut the hail down to size through a process called cloud seeding.

Back in 1991, a 30-minute hailstorm caused so much damage in the city of Calgary that insurers ended up forking over $342 million to their customers. Loathe to make a payout like that again, they banded together and hired a North Dakota outfit to do something about it. Weather Modification Inc. (WMI) flies cloud-seeding planes above and below hail-producing clouds, while firing flares full of silver iodide in the hopes of reducing the size of the hailstones [source: Sheremata].

How that works, or at least how they hope it works, gets us closer to the answer we seek. Just how big can hail get? 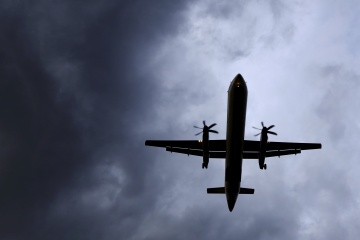 Some insurance companies are big on the idea of cloud seeding, or having planes spew out silver iodide to potentially shrink hail stones.
hammeron/iStock/Thinkstock

To understand how cloud seeding works, you need to get a basic grasp on how hail forms. It's all about thunderclouds and supercooled water. The first thing you need to know is that thunderclouds have updrafts. The second thing is that when water is supercooled, that means it's still in liquid form even though it's below freezing.

High up in the clouds (and under certain other conditions) water can remain in liquid form below freezing if it can't attach to, and form ice around, something solid.

But say it's summer and a little drop of water freezes in a cloud. Normally it would then fall earthward and melt into rain before hitting the ground. But if that cloud is thunderous, it has a strong updraft, which pushes the little pellet of ice back up to the colder areas where it meets with supercooled water, which instantly freezes around it. The pellet, now bigger, drops again, only to be shoved up again by that updraft until it meets more supercooled water, gets another layer of ice and falls. Depending on the strength of the updraft, this process can repeat for quite a while with the pellet, now a full-fledged hailstone, bouncing up and down inside the thundercloud until it gets so heavy it finally dive-bombs your greenhouse.

Typically hailstones are no larger than peas or marbles. But small fry like these aren't what insurers are worried about when they send cloud seeders into storms to prevent major damage. The idea behind cloud seeding is this: Silver iodide has a similar molecular structure to ice. That means it can be a "nucleus" for a storm cloud's supercooled water. The hope is that the little ice pellets will drop to the ground before they can form large, harmful balls of hail.

The scientific jury remains out as to whether this controversial methodology actually works. Cloud-seeding enthusiasts point to some data that claims major reductions in crop damage where the strategy has been put into practice.

If somebody was cloud seeding over Vivian, South Dakota, on June 23, 2010, it didn't work very well — that's when the largest haistone on record fell out of the sky. So, how big can a hailstone get? This one was 8 inches (20.32 cm) in diameter [source: NSSL]. That's almost as big as a bowling ball!

Author's Note: How big can hail get (and how is that even possible)?

Apparently, back in medieval Europe, would-be weather modifiers rang church bells and fired cannons into oncoming thunderclouds in their attempts to disrupt oncoming hail. Some skeptical scientists maintain that cloud seeding with silver iodide is little better than those early methods. Not living in a hail-ridden region, I had no idea how destructive this form of precipitation can be. Now that I do, it makes more sense that people throw whatever they can at the sky to stop it, even if those efforts come up short.