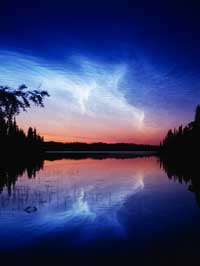 Beyond the types of cloud already mentioned, there are a few others that offer some interesting, sky-gazing masterpieces.

Rare clouds include lenticular clouds and cap clouds, both examples of orographic lifting, mentioned earlier. Lenticular clouds, featuring layers and a distinctive swirl pattern that makes them resemble anything from spinning tops to pancakes, are formed by the terrain's effect on air movement. Cap clouds, which mask mountaintops, form by a similar process.

Contrail clouds are another interesting type of rare clouds. After jet planes release exhaust streams, these clouds form in the wake of this exhaust. Contrails occur when the upper atmosphere's cold air freezes the vapors in the jet planes' exhaust. These clouds usually fade quickly after the jet passes.

Probably the most fascinating rare cloud is the noctilucent cloud, also known as polar mesospheric clouds (the latter term if you're viewing them from space). The word noctilucent comes from "night" and "shining," and true enough, you can catch a glimpse of these rare clouds only at twilight, when they glow a vibrant blue in our atmosphere's highest reaches.

Perhaps the most intriguing thing about noctilucent clouds is that they may not have always been around. Their first recorded sightings came a few years after the 1883 eruption of Krakatau; and many people believe that the volcano and noctilucent clouds are related. Krakatau's violent explosion sent particles of ash, dust and moisture to incredible heights -- as high as 80 kilometers (262,467 feet) -- and the clouds began to develop.

As Krakatau's wide-reaching effects settled during the five years following the eruption, people assumed that noctilucent clouds would also fade. But these clouds still exist and are spreading. Many people believe Krakatau might have been the trigger, but they claim that other elements allow noctilucent clouds to stay around today.

If your head isn't in the clouds and you want to learn more about this topic, visit the cloud-related links below.

Clouds also exist in space. In those vast reaches, tiny bits of dust and thin gasses band together and form what are commonly referred to as nebulae. To see pictures of different nebulae, visit Astronomy Picture of the Day and do a quick search for some great shots.

One nebula in particular, the Smith Cloud, appears to be headed straight for us. Well, straight for us as in straight for the Milky Way galaxy. Estimates say the massive collision probably won't take place for another 20 million years. Jay Lockman, of the National Radio Astronomy Observatory, said the impact of the Smith Cloud, with gas clouds already in the neighborhood, could lead to the creation of many new stars and give onlookers quite a show [source: Harris].