Why does humidity make my hair frizz? 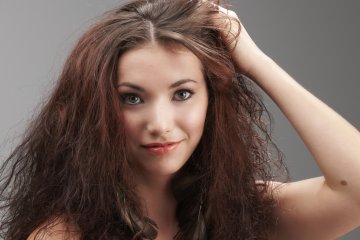 Just your luck. Ten minutes after leaving your blowout appointment, the weather takes a turn. Bright and sunny just minutes earlier, the skies have taken on a grayish hue, and the air is heavy with humidity. Your hair, which was all bounce and shine, is beginning to wilt. Before long, the next awful stage will set in: frizz. Blame your genes, hair products or bad luck, but frizzy hair is the bane of your locks' existence.

When the air is humid, high levels of hydrogen are present. (Remember, water is two parts hydrogen, one part oxygen.) And your hair is the first to know it, a veritable canary in the coal mine that can sense the unseen dampening forces creeping in all around.

So why does humidity make hair frizzy? When hydrogen bonds form between the proteins and water molecules in your hair, it will become curly and, potentially, frizzy.

A cross-section of an individual hair reveals many layers. For our purposes, we'll focus on the middle layer of the hair, which comprises coiled bundles of keratin proteins. These bundles are held together by chemical bonds, created either by neighboring sulfur atoms or hydrogen atoms.

The permanent bonds of sulfur atoms aren't affected by humidity; they help give hair its strength. The hydrogen atom bonds give hair its temporary shape. Every time wet hair dries, the hydrogen atoms reform their bonds with hydrogen atoms on neighboring strands of keratin protein, and these bonds hold until the hair is wet again [source: Doherty and Shore]. Hydrogen bonds are responsible for the bedhead you wake up with after falling asleep with wet hair.

Because hair is porous, it absorbs moisture when there is humidity in the air. Hair that is overly dry from chemically based hair treatments is particularly susceptible. (Keeping hair well moisturized can help you avoid frizz.) When hair absorbs moisture, a single strand of it forms significantly more hydrogen bonds between the keratin strands it contains. The hair essentially doubles back in on itself at a molecular level, absorbing water, forming bonds and swelling until it disrupts the cuticle, which is the smooth, outermost layer of the hair. Magnify this occurrence by an entire head of hair and the result is frizz [sources: Stromberg, Ray].