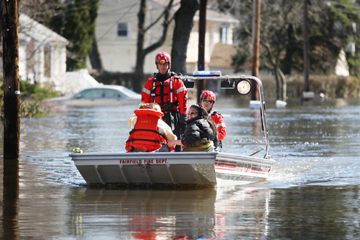 Two women are picked up by the Fairfield firefighter rescue team along the flooded Riveredge Drive in Fairfield, N.J.
© Mitsu Yasukawa/Star Ledger/Corbis

A flood survivor has taken refuge in the second story of an office building that's now a makeshift swimming pool. Or a stranded homeowner has crawled onto the roof to find safety from floodwater atop the shingles.

Rescuing floodwater victims is not as simple as sidling a boat up to a building. Rushing water makes it nearly impossible to safely transfer a person from a stationary object onto an undulating boat, so rescuers must learn hydrology, which is the study of water and, in part, its behavior under specific circumstances [source: United States Geological Survey].

Understanding how water acts when it is moving quickly through a confined channel helps rescuers act more effectively. For example, they learn how to angle a boat so it is not fighting a fast-moving current, and learn to "read" the water's surface to discern hidden obstacles such as submerged posts or vehicles.

In addition, floodwater rescue teams often send a member upstream (or up the street, as the case may be) to let them know large debris is headed their way. Other crew members are stationed downstream with ropes in hand so they can save anyone who may fall in the water before boarding the rescue boat.

Flood rescue teams are trained to put precise techniques into action, such as sending a second boat upstream to create an eddy -- a circular current that runs opposite of the rushing floodwater -- that will hold another boat steady against the side of a building so rescuers can help survivors aboard.

This rescue will happen again and again, until everyone stranded has been transported to safety. Rescue boats can only fit three or four passengers in addition to the crew, so teams will first take the young, old and injured to safety — sometimes performing first aid in the process. If someone does fall into the water while waiting to be rescued, a spotter on the boat will try to keep them in sight until they can be pulled out.

Once the rescue team's passengers reach land, they will be transferred to relief agencies that will offer food, shelter and other assistance in the wake of a natural disaster [source: IRIN News].

Author's Note: How do rescue teams search a flooded city?

While researching this article I came across an article that described how rescuers floated over the vehicle of a woman and her two daughters, trapped and drowned, while rescuing someone clinging to a tree. This poignant image, of help come too late, of water too murky to reveal its captives, has stuck with me through the week. As has the newfound knowledge that floodwater is the leading cause of weather-related death in the U.S. How many rescue personnel are trained in water rescue (which sounds like a surprisingly complicated affair) in cities not prone to frequent floods? My guess is not nearly enough.