by the Editors of Publications International, Ltd.
START COUNTDOWNNEXT
Start the Countdown 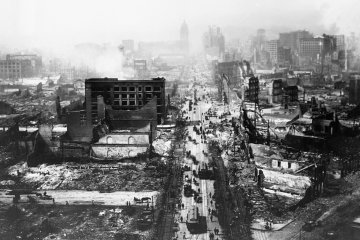 Every year, earthquakes cause thousands of deaths, either directly or due to the resulting tsunamis, landslides, fires, and famines. Quakes occur when a fault (where Earth's tectonic plates meet) slips, releasing energy in waves that move through the ground.

Scientists measure the strength of tremors on the Richter scale, which assigns magnitude in numbers, like 6.0 or 7.2. A 5.0 tremor is equivalent to a 32-kiloton blast, nearly the explosive power of the atomic bomb dropped on Nagasaki in 1945! Going one whole number higher -- such as from 5.0 to 6.0 -- reflects a tenfold increase in the amplitude of waves. Here are some of the most destructive earthquakes in recent history.