Do tornadoes always move from west to east? 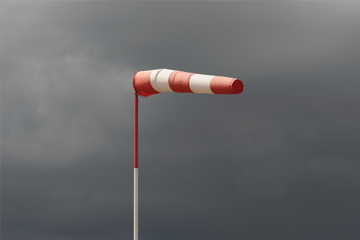 Remember the tornado in "The Wizard of Oz?" It was made from a 35-foot (11-meter) long windsock.
Andreas Schulze/ThinkStock

A good rule of thumb when learning about tornadoes: There's no such thing as always. Sure, some rules aren't easily broken; lying low in an interior room bathroom tub, for instance, is going to be a lot safer than riding out a tornado in a mobile home. But don't fool yourself into thinking that the bathtub is the perfect safe haven, as 200-mile-an-hour (322-kilometer-an-hour) winds can fling them about pretty easily [source: Edwards]. Likewise, cities aren't often hit by tornadoes, but best you not go spouting off to people in Oklahoma City that they're safe from a twister. Many cities have been hit hard by tornadoes -- including OKC, multiple times-- and there's no reason to believe they are "safer."

All this is to say that if you see a tornado, don't assume that running west is going to save you. While most tornadoes do move from southwest to northeast, that isn't some sort of law of nature [source: MCEG]. In fact, tornadoes must be routinely amused by what lowly humans assume are their "natural laws," because they also don't fear bodies of water or mountains, and nothing "attracts" them to trailer parks.

Just because most tornadoes move in this west-to-east formation doesn't mean that all of them do. Remember that they're formed by thunderstorms, so they often follow the path of their "parent" storms, which also generally move from the southwest [sources: Cappella; Chicago Tribune]. But tornadoes can easily turn or even backpedal -- sometimes quite suddenly -- and travel the opposite way if they're hit with the right kind of wind from a system [source: City of Chicago].

Do remember that different places in the United States (and the world in general) have their own specific, picky weather patterns. Minnesota, for instance, will often have storms that move in a northwestern direction, which checks out, because a lot of their weather systems come down from the north. Texas gets a lot of southeastern fronts, so they're going to see different paths on their storms [source: MCEG]. Each region of the world might have a general weather or storm pattern, but -- maybe you've heard -- weather is unpredictable. It's really dangerous to assume that, just because the storms or wind in your area tend to move in one direction, you can determine where a storm is going.

Bottom line? Tornadoes will often move in a generally west-to-east pattern through a lot of tornado country. But that doesn't mean that they always do, nor does it guarantee that they'll steadfastly stay the course. If you're running from a tornado, best you run straight to a shelter and not try to predict where it will mosey off.