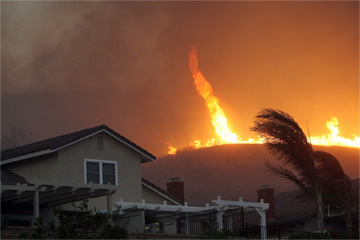 A tornado just might be nature's greatest spectacle. A small one inspires awe and wonder. A larger one drives people into shelters and basements. And a monster tornado, a storm that earns an EF-5 rating on the enhanced Fujita scale, well, there's a reason why it's sometimes referred to as "the finger of God." When such a storm strikes, it leaves behind complete and total devastation, the way an angry deity might if he wanted to punish mortals for their sins.

Now inject heat, ash and fire into a spinning mass of air. Watch as a funnel of flames leaps from the ground, reaches for the heavens and then races forward to consume everything in its path. Is such a phenomenon possible? And if so, could such a storm rage with the same intensity as an EF-5, becoming, if you will, "the finger of the devil"?

You might be surprised to find out that the answer to both questions is yes, and the storm responsible is typically known as a fire tornado, a fire whirl or a fire devil. If the latter two terms sound familiar, it's because they echo the colloquial names we give to similar meteorological phenomena – whirlwinds and dust devils. In fact, fire tornadoes are more closely related to whirlwinds than they are to full-fledged tornadoes. But all such storms are related in that they involve a mass of air rotating rapidly around a central axis.

So why haven't we heard more about fire tornadoes? It's not because they're uncommon, but because they form in situations most of us try to avoid. These situations include wildfires, large fires spawned by natural disasters and, in some cases, house fires. As you might expect, firefighters have seen their share of fire tornadoes. And scientists who want to study the characteristics of these strange storms must venture into infernos or bring the inferno into their labs. Think of it as storm chasing, with an incendiary twist.