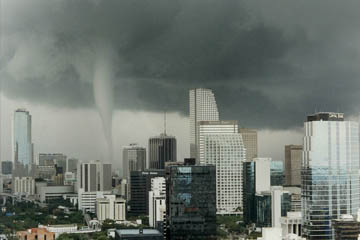 Tornadoes don't avoid anything, including downtown Miami back in 2007.
Miami Herald/Getty Images

Tornadoes don't avoid anything. Not mobile homes, not gigantic concrete bunkers, not bathtubs, not rivers, not mountains. While it's nice to think tornadoes use some sort of internal compass to follow a path of least destruction, there is absolutely no such thing. They are simply unpredictable.

Let's cut to the chase. Tornadoes don't avoid big cities. They don't avoid tall buildings, and they aren't skittish around big city rats, either. Public transportation systems don't intimidate them. Tornadoes have the ability to destroy just about anything. However, it does seem a little strange we so rarely hear about cities ravaged by twisters, especially in dense urban areas.

First, it's important to note that tornadoes have indeed hit cities and the damage has been truly terrible. Oklahoma City, for example, was hit by an EF5 tornado (that's the strongest tornado on the Fujita tornado scale) in May 1999, leaving $1 billion of damage and 36 people dead in the city and suburbs [source: CNN]. The city was hit again in May 2013, when 25 people were killed after a tornado struck the city and suburbs [source: Weather Channel]. Tornadoes have also been reported in cities as geographically scattered as Salt Lake City, Dallas and Miami [source: NOAA].

As you see, big cities – and the people who live there – are not safe from tornadoes. But while 80 percent of the population does live in urban centers, this doesn't mean that urban areas take up the majority of the land in the United States [source: Census Bureau]. And that might be the key to why we don't see urban areas hit as often. Cities are specks on the map compared with the sprawling rural land surrounding them. It stands to reason there's a much smaller chance of a tornado winding its way through a city. Also, there just aren't that many big cities in extremely tornado-prone areas (known collectively as "Tornado Alley") [source: Tornado Project]. It's simply a geographical anomaly.

And although there are some myths that twisters are unable to form around skyscrapers, that's also false. Tornadoes begin way up in the clouds, thousands of feet above skyscrapers.