Browse the article Can you really fight fire with fire? 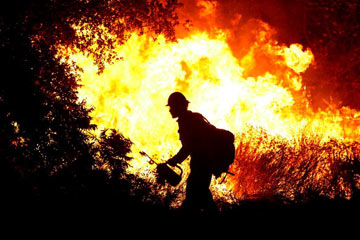 Chances are your experiences with the phrase "fight fire with fire" have more to do with the opening track on Metallica's 1984 album "Ride the Lightning" than they do with actual flames. Or when your closest friend hears about your nasty breakup and says, "Girl, you better fight fire with fire," this usually isn't encouragement to purchase a flamethrower. Likewise, don't take that halftime pep talk too seriously. Your football coach isn't suggesting a fourth-quarter napalm strike on the home team.

The phrase goes back at least as far as 1597, when William Shakespeare wrote "Be stirring as the time; be fire with fire; Threaten the threatener and outface the brow of bragging horror" in his play "The Life and Death of King John" [source: Martin]. In other words, match aggression with aggression. Meet violence with violence. Take an eye for an eye. He sends one of yours to the hospital, you send one of his to the morgue. You know -- the Chicago way.

Metaphors, Sean Connery and heavy metal aside, the phrase takes on literal significance in the world of preventing and fighting forest fires. When faced with a massive, woodland-consuming storm of flames and ash, your first instinct might not be to apply more fire to the dire situation. But think about it for a second: A fire needs oxygen and fuel, such as leaves and vegetation, to continue raging. Rob the fire of either source of nourishment and you squelch the chemical reaction that produces it.

When faced with an oil-well fire, firefighters have been known to remove the oxygen from the equation by detonating a little dynamite. The blast eats up all the local oxygen, leaving nothing to keep the fire going. When an entire forest is ablaze, however, a different tactic is in order. Firefighters remove the fuel -- and what better way to quickly remove combustible underbrush than to carefully set it on fire?

Skip to the next page. It will all make sense soon. 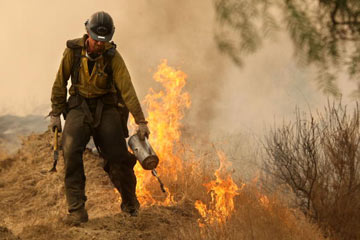 Explore the links on the next page to learn even more about wildfires and firefighting.