Anatomy of a Prophecy: The Predictions of Nostradamus 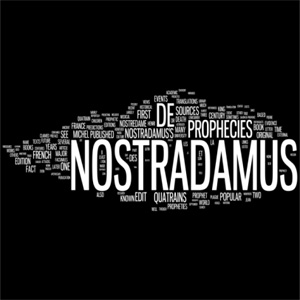 People have credited Nostradamus with predicting a lot of global disasters -- both man-made and natural. Did he ever tackle 2012?
Hemera/Thinkstock

In order to understand what Nostradamus may or may not have said about the year 2012, it helps to understand the structure of the soothsayer's work. Nostradamus' Centuries consists of hundreds of four-line rhyming verses called quatrains written in French, Greek and Latin, among other languages.

Because Nostradamus lived in an era of intense religious and political persecution, he made sure to use vague language when writing his prophecies. His approach proved to be a wise one. By 1558, Nostradamus had gained favor with Catherine de' Medici, the queen of France, who eventually appointed him court physician [source: History.com]. And like Catherine de' Medici, millions of others have been fascinated by Nostradamus' writings, claiming they've predicted everything from the French Revolution to the bombing of Pearl Harbor.

To understand how people have interpreted Nostradamus' writings throughout history, let's examine a translation of a quatrain frequently credited for predicting the Great Fire of London in 1666, courtesy of Sacred-texts:

The blood of the just will commit a fault at London /
Burnt through lightning of twenty threes the six: /
The ancient lady will fall from her high place /
Several of the same sect will be killed.

This quatrain is unique in that Nostradamus specified a number related to the event he describes. Still, while the prophecy has some specifics like a location and what could be a date, terms such as "blood of the just" and "ancient lady" are left open to interpretation, just as Nostradamus intended. Because we can deconstruct his prophecies in so many different ways, they've never been used to predict an event before it has occurred. And since Nostradamus' prophecies are so vague, it's difficult to pin any of them to a particular era, much less a specific year.

For instance, while the quatrain many feel predicted the London fire of 1666 contains the number 66 ("twenty threes the six"), it doesn't specify a century or even that the number 66 is referring to a year at all. Instead, we're left combing through verses after a major event occurs, looking for anything that might apply. Clearly, this makes it difficult to determine whether Nostradamus made any specific predictions about the year 2012 in his famed prophecies. But does his most famous work contain anything that might hint at things to come in the year 2012? And might there be other works by Nostradamus that could give us immediate cause for concern? In the next section, we'll dig into his famous quatrains a little further while examining the evidence surrounding a work some call the lost book of Nostradamus.