Is it true that scientists are predicting a really big earthquake will sink western California? 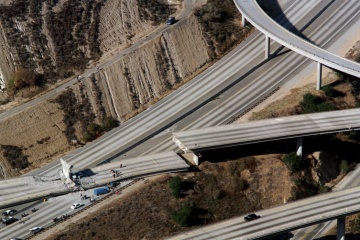 You can see the highway damage in Northridge, California, after the 1994 earthquake.
Carlos Schiebeck/AFP/Getty Images

This often comes up when when people talk about earthquake activity along the Pacific coast of the United States. Seismologists have predicted that a massive scale (8.0 or higher on the Richter Scale) earthquake will shake the region sometime within the next 30 years or so. This is the so-called "Big One" that makes many Californians understandably nervous and inspires a variety of apocalyptic disaster speculations.

But while the Big One would definitely wreak mass destruction, it would not sink part of California into the ocean, nor would it break the state off from the rest of the country. The idea comes from a misunderstanding of the seismic forces that cause earthquakes in the region.

Powerful earthquakes occur frequently along the west coast of the United States because the region is near a boundary between two tectonic plates. If you've read How Earthquakes Work, then you know that the earth's surface is made up of large, rigid plates that slowly drift over the mantle layer below. At the boundaries between plates, a number of things can happen. The Pacific plate and the North American plate simply grind against each other -- one creeps slowly northwest and one creeps southeast.

This boundary forms a fault line that extends under the ocean and on land along the west coast of the United States. The San Andreas Fault in California is the piece that's on land. Smaller faults form in the crust material near the boundary line due to the forces of the plates pushing on each other.

Friction builds up along faults because the two sides are pushed very tightly together. If the force of friction exceeds the forces moving the earth, the two sides will become "locked," so they stop creeping. When this happens, tension builds up along the fault line until the force of movement is great enough to overcome the force of friction. Then the pieces of earth suddenly "snap" into place, releasing a large amount of energy that causes earthquakes in the earth's crust.

Many scientists estimate that there is enough tension built up along some locked California faults, that when they do finally slip, the earthquake will be extremely powerful. The Hayward Fault particularly concerns these scientists because it runs under heavily populated areas in and around Los Angeles.

And this is indeed the case. But, even in a massive shift along the fault, the plates travel an incredibly short distance -- a matter of feet in the most extreme shifts. The tension cannot build up to the point that one entire mass of land will shift many miles in relation to another one, so you will not see any sizable piece of land breaking away from another. Instead, the pieces of land will move away from each other very slowly, taking millions of years to make large scale changes. One end of California may slowly drift so that it is eventually under water, but this can hardly be construed as "sinking into the ocean."

Are tornadoes getting stronger?
'Rainbow Lightning': One of Mother Nature's Rare Shows
The 'Big One' Was No Match for Alaskans