How a Sharknado Would Work 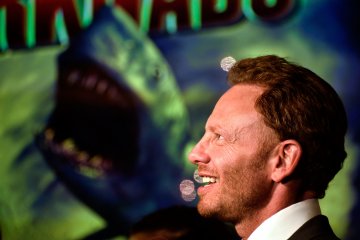 Ian Ziering leaves his "90210" days behind at the Los Angeles premiere of "Sharknado" in August 2013.
Frazer Harrison/Getty Images

Marksville, Louisiana, 1947: Fish are reported falling from the sky. Odzaci, Serbia, 2005: Thousands of frogs rain upon the city. Lajamanu, Australia, 2010: Hundreds of spangled perch drop from the sky down onto the small town. Los Angeles, 2013: Great white sharks pelt the metropolis from the sky, massacring everyone in sight.

OK, maybe that last one wasn't true. But with all the documented instances of animals getting sucked into tornadoes and plummeting en masse back to the earth, maybe it could be. At least that's what the 2013 film "Sharknado" would have you believe.

In the movie (and its obligatory sequels, "Sharknado 2" and "Sharknado 3"), a freak cyclone hits the oceanfront, and sharks are sucked into the whirling winds. As the storm moves over the city (Los Angeles in the first movie, New York in the second and Washington, D.C., in the third), the sharks drop out of the sky and attempt to rip apart anything in their path. As if that weren't enough, sharks enter the streets as well with the massive flooding from the storm. The sharks attack the city dwellers from the land, air and sea, leaving them no escape from the bloodthirsty beasts.

While we know this B movie isn't actually real, could it be? Or at least some elements of it? Let's explore exactly what would have to happen to turn this campy thriller into a real-life nightmare. 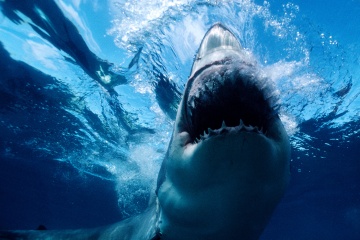 What would it take for great whites to congregate? Our guess is food – and lots of it.
Watt Jim/Getty Images

The movie starts off with a sea captain and his crew catching sharks and slicing off their fins to sell for soup. As they set the scene, they discuss the major moneymaking opportunity to be had, as there was a record-breaking pod of 20,000 great whites all congregated in the sea.

All right, let's digest that. What would it take to get 20,000 sharks to come together? This is a tough one. The movie highlights great white sharks, but do that many great white sharks exist, and are they located even remotely near each other? It's impossible to put a number on the population of these guys, but the great white was not doing so well for many years. Off the coast of California in the 1970s and 1980s, there were estimates of only 219 of these sea creatures in existence. Thanks to legislative action to protect the sharks, estimates from a 2011 census put the number at closer to 2,400 adult great whites [source: Lee]. Still not 20,000, but 2,400 will do to get us a legitimate sharknado with a few hundred sharks in it.

We've figured out the number situation, but we still have to get a bunch of sharks into one spot. For the most part, sharks are loners; they don't travel in packs. That said, studies have shown that some sharks will form groups to hunt (cooperative hunting), and that aggregating also may help with migration [source: Viegas]. So to make this sharknado work, we're going to have to select a place and a time of year that match up with their migration patterns.

Thankfully (for creating a sharknado), great white sharks tend to spend most of their lives relatively close to shore [source: Schwartz]. Ideally, we would find a way to remove most of their food options for a bit to increase their appetite and then plop into the water a big, bloody mess of food to get them to congregate. Generally sharks can detect pressure changes associated with oncoming storms, and they take evasive action, going into deeper waters [source: Gray]. So we'll have to make that mess of food really enticing to fight against this tendency.

We've painted the picture of what needs to happen to the sharks to get them primed to be sucked up into a sharknado. Let's take a closer look at the weather system needed to take these sea predators into the air.

The Perfect Weather for a ... Sharknado?! 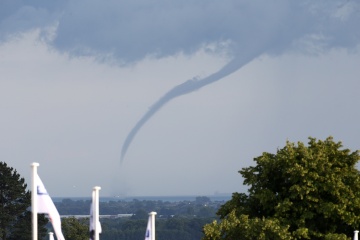 A waterspout touches down in the English Channel off the English coast on June 28, 2014.
Jordan Mansfield/Getty Images

In theory, a sharknado should work like a regular tornado, just with a little extra flair (flair = man-eating sharks). Technically speaking, since the sharknado is going to suck up sharks from the ocean, we'd be talking about a funnel cloud that forms over the water: a waterspout. Generally weaker than tornadoes, waterspouts can form from fairly innocuous clouds. But if we're looking for a weather system that is going to suck up sharks, we'll need the more powerful tornadic waterspout.

Like its land counterpart, tornadic waterspouts are whirling columns of air that develop from thunderstorms. As the condensation associated with the thunderstorm releases heat, that heat becomes the energy that drives huge upward drafts of air. This movement of air eventually can turn into a vortex where warm air on the inside moves upward and cool, dry air on the outside of the vortex sinks. The difference in temperature between the inside and outside of the vortex builds a level of instability that helps the tornado -- or in this case, waterspout -- thrive.

Once the waterspout moves ashore, it becomes a tornado. If it has managed to suck sharks up into its funnel cloud before it moves ashore, then we'd call it a sharknado.

Waterspouts typically form over warm, tropical waters. In fact, the Florida Keys have just the right balance of warmth and moisture to generate more waterspouts than anywhere else on Earth [source: Kellogg]. The common formation of waterspouts and the fact that great white sharks have been found off the Florida Keys means that our best chances of getting a sharknado to form are in the Sunshine State.

The Sharks (Literally) Rise Up

Tornadoes have been known to move all sorts of heavy objects, tipping over trains and sucking up cows, so the weight of a shark isn't likely to pose a huge barrier in our sharknado scenario. Great white sharks can weigh up to 5,000 pounds (2,268 kilograms) and sometimes even more [source: National Geographic]. The average weight of a mature dairy cow is about 1,400 pounds (635 kilograms) [source: Purdue University]. If a tornado can pick up a few cows, it definitely should be able to support the weight of a great white, as long as you have the right amount of wind.

To figure out the wind speed the waterspout must have to pick up a great white, we need to know the terminal velocity of a shark (the speed the shark would fall if you pushed it out of an airplane). Since people don't normally throw sharks out of planes, not all the parameters of the equation for terminal velocity are worked out specifically for sharks. To do the calculation, we're going to have to make some assumptions about the drag of a shark and its surface area, but we can still come up with a ballpark figure.

To fill our equation in with numbers, we'll use 2,268 kilograms for the great white's weight, known constants for acceleration due to gravity (9.8 meters per second squared) and air density (1.2 kilograms per cubic meter), an assumed drag coefficient of 1 (unitless value) and an assumed surface area of 4.6 square meters based on the average length for this sea predator (4.6 meters, or 15 feet) [source: National Geographic].

Crunching those numbers through our calculator gives us the terminal velocity for a great white shark.

Translating that into the wind speed we'd need to lift the shark off the ground, we get about 200 mph (322 kph). Waterspouts generally have speeds of less than 100 mph (161 kph), so this would have to be one massively strong weather system. It would have to rate at least a 3 or 4 on the Fujita Tornado Damage Scale (severe to devastating damage where trains can be overturned, cars thrown and houses leveled) [sources: Kellogg, Storm Prediction Center].

Just as small objects in tornadoes tumble around and fall out of the vortex, you have to imagine that the sharks continually fall down as wind speeds decrease and change direction, but they may then be lifted back up again into the vortex as winds increase. So as the shark-ridden waterspout approaches land and becomes a sharknado, these sharks may fall from the sky onto unsuspecting humans. But how would they behave upon falling out of the sharknado? Would you really get a bunch of bloodthirsty beasts waiting to feast upon humans? Probably not.

Let's assume that the sharks are not at all harmed by being out of the water, getting tumbled around within the vortex, or being subjected to the pressure changes within the cyclone. Would the sharks want to eat people immediately upon falling out of the storm? Likely, no. Yes, they'd probably be agitated, but sharks don't generally like to eat people. Scientists speculate that sharks aren't very interested in humans, and usually only attack them when curious or because they mistake them for other sea creatures that are normally their prey – like seals [source: National Ocean Service].

But all those assumptions we just made about the sharks being alive upon falling out of the sharknado are completely out there. Sharks aren't able to breathe out of the water, as they need a constant flow of water over their gills to get oxygen. The waterspout may draw up some water droplets into it as it moves over the ocean, but it couldn't possibly draw up nearly enough water to keep the sharks happy and alive. Word on the fishing boats and docks is that sharks can still bite after they've stopped breathing, but involuntarily shutting their jaws on someone's hand is very different than a bloodthirsty attack.

So there we have it. We've painted a somewhat feasible picture of how a sharknado would form if it could, but it falls apart right at the end there with the on-land feeding frenzy. But have no fear: Even if a sharknado can't happen in real life, it will live on in Hollywood as they continue filming sequels.

Author's Note: How a Sharknado Would Work

Perhaps the nerdiest (and maybe the coolest) thing I've ever done was go to shark camp in 7th grade. So yeah - I'm basically a shark expert. Sadly, "Sharknado" was not destined to premiere its greatness for two more decades, so we didn't get to sit down and study how a sharknado would work, or maybe how a sharknado actually never would work. But still this article was a great chance to review my old notes from 7th grade. (Not really. I was a nerd, but not such a big nerd that I still have these notes.) In all seriousness, it was fun to sit down and imagine what would have to happen to bring this B movie imaginary world into a real-life scary situation.

If Rainbows Are Circular, Why Do We Only See Arches?
1816 Was the Year Without a Summer
Is a Double Hurricane Something You Should Start Freaking Out About?