How No-fly Zones Are Created 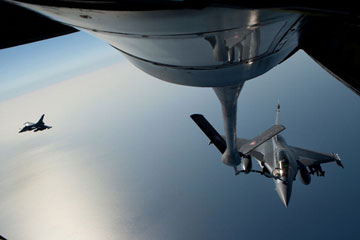 A French air force fighter jet refuels with a Boeing refueling tanker over the Mediterranean sea during the no-fly zone operation "Harmattan" in the critical region on Benghazi, in April 2011.
Patrick Aventurier/Getty Images

Because the concept of no-fly zones is so new -- counting Libya, they've only been imposed in three conflicts -- and the duration and objectives have varied so much, there isn't yet a standard playbook for how to set up and enforce such a ban.

The legal authority for creating no-fly zones comes from Chapter 7, Article 42 of the U.N. Charter, which states that if diplomacy isn't able to resolve a threat to international peace, the U.N. may authorize "demonstrations, blockade, and other operations by air, sea or land forces" [source: UN.org]. Thus, the first step is obtaining a mandate from the 15-member U.N. Security Council. That usually requires some deft diplomacy, since any of the five permanent members -- the United States, China, Russia, the U.K. and France -- can block the action with a veto. In the case of the Libyan no-fly zone, China and Russia opposed the plan but were persuaded by advocates to abstain from the vote [source: UN.org].

The U.N. resolution that imposed the Libyan no-fly zone lays out only the most basic parameters. It bans any flights in Libyan airspace, except for humanitarian missions to deliver medical supplies and food or to evacuate foreign nationals from the conflict area. It also authorizes member states to enforce the ban, provided that they notify the U.N. and report back on a monthly basis to detail their actions and provide information on any violations of the ban. United Nations members are also authorized to deny permission to any aircraft to take off from, land in or overfly their own airspace, if they have reason to suspect that a plane is transporting weapons or mercenaries to Libya [source: UN.org].

Once the U.N. has given permission, someone actually has to agree to organize and enforce the flight ban. In Libya, after additional negotiation between NATO ambassadors from various member countries and conference calls that included U.S. Secretary of State Hillary Clinton and her counterparts from the U.K., France and Turkey, NATO agreed to take on the jobs [source: Labott and Newton].

One reason that imposing no-fly zones is so complicated is that the U.N. and the countries who'll provide aircraft, missiles and personnel have to agree on rules of engagement (RoEs), which spell out, among other things, when and how to confront possible violators, how much force can be used against them, and who authorizes taking action in such situations. We'll discuss the RoEs for no-fly zones and how they're carried out in the next section.