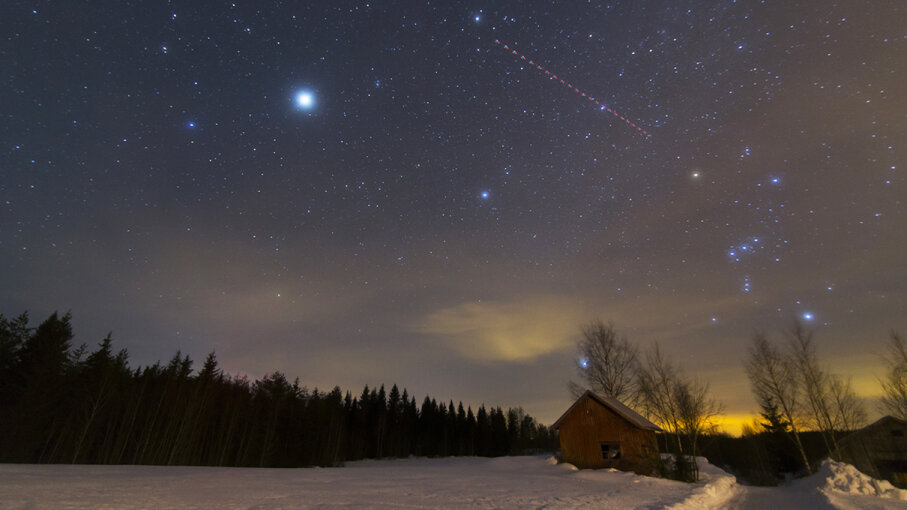 The Orionid meteors appear to originate in the night sky near the constellation Orion. Milamai/Getty Images

We tend to think of outer space as a void, but it's filled with lots of little pieces of space junk. One example: tiny fragments of rocky debris left behind by Halley's comet. This happens when the comet is exposed to solar heat as it swings near Earth every 76 years or so. Earth's own orbit, in turn, passes through clouds of those fragments on two occasions each year, which result in meteor showers that delight backyard astronomers.

The first Halley-related event, the Eta Aquariid meteor shower, happens in May. Now, in the fall, it's time for the second — the Orionid meteor shower. The event gets its name from the constellation Orion, which is in the part of the nighttime sky from which the meteors also appear to originate (even though in reality, they're much closer to Earth). This year, Orionid meteors appear between Oct. 15 and 29.

The peak time for the Orionids this year probably will be in the early hours of Tuesday, Oct. 22, around 2 a.m. This is when astronomers predict the peak number of meteors will be visible in the sky, although Bill Cooke, head of NASA's Meteoroid Environment Office, tells Space.com that a bright moon could mess with how well you're able to see the meteor show. He says the best time for viewing would be the hour or two before dawn.

The American Meteor Society describes the Orionids as a "medium strength" shower and notes that in a typical year, the Orionids produce about 15 to 25 tiny meteors that flash across the sky per hour at peak viewing times. Some of the Orionids are as small as a grain of sand. Even so, when the tiny bits of Halley hit our atmosphere at a speed of 148,000 mph (238,000 kph), friction causes them to burn up brightly. If it's hard wrapping your head around the speed of an Orionid meteor think of it this way: They travel 41 miles (66 kilometers) in a single second.

As Cooke explained in 2014, the Orionids might not be the biggest meteor display around, but it's one of the more beautiful ones. That's because the shower is surrounded by some of the sky's brightest objects — not just Orion, but the constellations of Taurus and Gemini, too.

As noted earlier, the best time to see the Orionids generally is one to two hours before the sun comes up, when the sky is still dark and Orion is high overhead, says NASA. Lie on a blanket and watch for them emerging from near the constellation's upper-left "club." If you watch enough times, you may get to see one of the event's most spectacular sights — a glowing, filament-like tail left by even tinier pieces of the object, which can twist into strange shapes and hang around for several minutes.

Now That's Interesting
The annual Geminids meteor shower, a stream of debris cast off from the asteroid 3200 Phaeton as Earth crosses its orbital path, peaks each December with about 60 to 80 meteors per hour.