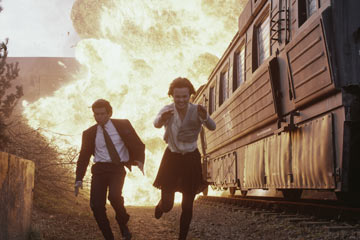 Pierce Brosnan (as the ever-suave James Bond) and Izabella Scorupco flee from an exploding train in the movie "Goldeneye." Would this work in real life?
Keith Hamshere/Getty Images

For most of us, movies are a form of escape. And as part of the escape, many viewers are willing to give Hollywood some leeway when it comes to the accuracy of life as portrayed on the big screen. Most of us probably don't really think that stormtroopers, Jedis, Wookiees and little green men wielding light sabers chased each other around a long time ago in a galaxy far, far away. Nor do we truly believe that Abraham Lincoln slayed vampires before he delivered the Gettysburg address. Yet, for cinematic genius like "Star Wars" or the couple of hours of cheap entertainment of "Abraham Lincoln: Vampire Hunter," we're willing to suspend reality.

Nevertheless, there are certain cinematic devices used so often in film and television that many viewers are left thinking that these stunts could actually be pulled off in real life.

Take the "running away from an explosion" scene, for example. In its basic form, the device features our hero — James Bond, John Rambo, Jason Bourne — narrowly avoiding extinction by sprinting away from a fiery blast just in the nick of time. The explosion sequence is the hallmark of an action adventure flick. In "Die Hard," Bruce Willis didn't turn his undershirt from bright white to dirt-caked in 131 minutes by just rolling around with a machine gun. He also swung from a fire hose to escape an exploding skyscraper [source: TV Tropes].

No one seems to doubt that Willis' hard-boiled John McClane could pull off such a feat, but what about ordinary schlubs like you and me? Read on to find about whether an explosion can really be outrun.