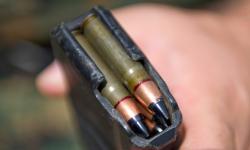 The size of a bullet is measured in calibers.
Cliff Volpe/Getty Images

All three of these questions have to do with unusual units, and they all show just how interesting measurement systems can be!

Bullets come in variety of different calibers. The­ caliber indicates the diameter of the bullet. Some common calibers include:

­For example, you have probably heard of a ".22 caliber rifle." In all of these cases, the caliber number indicates the diameter of the bullet in inches. So a .25 caliber bullet is a quarter of an inch in diameter. Words like "Magnum" and "Special" imply that a higher-energy powder is used with the bullet. This page has a lot of information on bullet calibers. It also talks about the gauge of shotgun shells and says that the gauge numbers for a shotgun (12 gauge, 14 gauge, etc.) are "the numbers of lead balls -- of diameters equal to the inside diameter of the gun -- that are required to total up to a pound of lead." That's about as weird as units get!

­The measurement system for wire is also interesting. AWG stands for "American Wire Gauge" and is a standard in the United States for wire diameters. In a house, you typically find 10, 12 and 14 gauge wire, and electronics projects typically use 20 gauge wire. Wire gauges run from 000000 gauge, which is ­about half an inch in diameter, down to 40 gauge, which is 0.001 inches (this page has a complete chart). The higher the AWG number, the thinner the wire.

Where did this odd system come from? According to this page, "The modern method of drawing wire is believed to have originated in Europe late in the 13th cent. In this process the metal is pulled, or drawn, through a number of holes, each smaller than the one preceding, until finally it is passed through the hole having the desired diameter." The gauge number stems from how many holes the wire is drawn through, and the more holes it's drawn through the smaller the diameter.

This page has some good information on wire resistance.

Then there is the common penny designation used with nails. You can buy nails ranging from twopenny to fiftypenny in the United States (represented as 2d or 50d, respectively).

Why is "d" used in­stead of "p"? According to this article, "This stems from Roman times. The "d" stood for "denarius," a small coin common throughout the Roman empire." The penny designation can be translated into length, as shown on this page. It's not clear that anyone knows where the penny designation comes from -- it might have indicated the cost of 100 nails in the 1400s.

What Is the Butterfly Effect and How Do We Misunderstand It?
Ray of Enlightenment: Is Light a Wave or a Particle?
What is dynamite and how does it work?