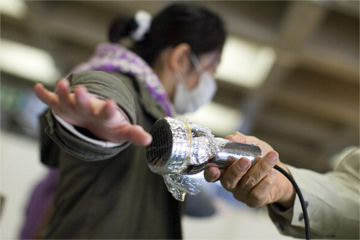 Already reeling from the devastation of an earthquake and a tsunami in March 2011, Japan faced another daunting hurdle on its road to recovery: cleaning up the damaged Fukushima Daiichi nuclear power plant. After the earthquake and ensuing tsunami damaged the facility's coolant systems, plant operators worked tirelessly to limit the meltdown at Fukushima Daiichi and restrict the release of radioactive material into the surrounding environment.

Cleaning up radioactive material under any circumstances can be a complicated, expensive undertaking, and Fukushima Daiichi will be no exception. Hidehiko Nishiyama, a spokesperson for Japan's nuclear safety agency, has already announced that it will be months before the agency will have the situation at the plant entirely under control, and some experts estimate the cleanup effort could last years or even decades. What's more, the cost of the cleanup could easily skyrocket past the cost of building the power plant in the first place [source: Klotz].

To understand why radioactive cleanup is so tedious and costly, it helps to know why radioactive material is so dangerous in the first place. Radioactive material, unlike most matter, is inherently unstable. Over time, the nuclei of radioactive atoms emit what's known as ionizing radiation, which can come in three primary forms: alpha particles, beta particles and gamma rays. Under certain circumstances, any of the three can harm humans, stealing electrons from atoms and destroying chemical bonds. Unlike alpha and beta particles, however, gamma rays can pass directly through the body, wreaking havoc in the process. Indeed, faulty attempts by the body to repair that damage can lead to cancerous cells.

Uranium and its byproduct, plutonium, both produce gamma rays at levels extremely dangerous to humans -- even brief exposure to a small amount of plutonium can prove fatal, for instance -- but nuclear power would be impossible without them. Thanks to rigorous safety standards and mechanisms, however, workers at nuclear power plants (and everywhere else radioactive material is handled) very rarely come in contact with harmful levels of radiation.

Still, these facilities can't operate forever, and that's when radioactive cleanup is necessary. In fact, it's called for in a variety of situations, not just meltdowns. Decommissioning a nuclear weapon? Disposing of radioactive medical waste? You're going to have to go through the highly involved ordeal that is radioactive cleanup. Before the process can start, crews need the equipment to do the job. We'll find out what trusty tools technicians turn to next.

Tools of the Radioactive Trade 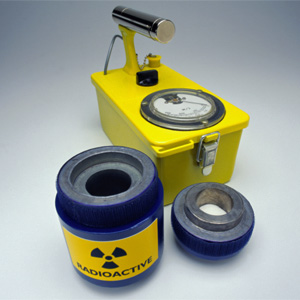 As any agency involved in the cleanup will tell you, safety is first priority. Accordingly, all personnel working among potentially harmful levels of radiation wear thick vinyl hazmat suits, masks and rubber boots capable of blocking at least a percentage of harmful radiation.

Of course, instead of relying on safety equipment to protect them, workers would rather avoid radiation altogether whenever possible. To that end, crews often carry Geiger counters that give them both the direction and intensity of a radiation source. In addition, workers may carry dosimeters, portable devices that track the amount of radiation exposure workers receive during their shift. These devices prove particularly helpful when workers know they will receive intense doses of radiation and require a warning to leave the site once that dosage approaches harmful levels.

Depending on the type of operation, crew sizes can vary greatly. At Fukushima Daiichi, a relatively small team of 300 workers struggled to stabilize the power plant so that larger cleanup efforts could begin [source: Boyle]. After the Chernobyl disaster -- widely considered to be the worst accident to ever occur at a nuclear power plant -- around 600,000 workers were involved in the cleanup, and the areas surrounding the power plant are only now safe to visit for short intervals [source: U.S. NRC].

Interestingly enough, decontamination crews often use the same mops, brooms, shovels and brushes to perform their jobs that you might find at a local hardware store.

Thankfully, human workers don't have to handle every aspect of a radiation cleanup. For instance, Germany volunteered two robots to aid in stabilizing and, ultimately, decontaminating Fukushima Daiichi. Other robots can handle everything from dismantling nuclear bombs to fixing jammed equipment in highly radioactive environments. In some cases, the robots themselves become so contaminated that they're scrapped eventually as radioactive waste.

In the case of dealing with spent fuel rods, both heat and radiation are a concern. So, workers use a whole lot of water to both cool such materials and to contain their radiation, sometimes for years at a time. Along with water, concrete, glass and dirt prove fairly effective at storing radioactive material, particularly when paired with containment vessels and storage facilities.

If you're like many people, you have all manner of antibacterial soaps and cleaners in your household. It's somewhat ironic, then, that scientists have found a way to use the infamous bacteria E. coli to scour the environment. By combining the bacteria with inositol phosphates -- an agricultural waste material -- scientists can first bind uranium to the phosphates and then harvest the uranium to remove it from the environment. As an added benefit, the process produces uranium almost as cheaply as traditional mining.

Imagine sweeping your kitchen floor and then having to throw away not only the dirt you've swept up but also the broom, the dustpan and even the trashcan you threw everything into. That scenario gives you a glimpse of the difficulty and expense of cleaning up radioactivity; workers have to address the source of the radiation and everything that source has contaminated. Yet as difficult as the process can be, it's not always complicated. In many cases, workers are tasked with simple chores like sweeping up low-level radioactive material, wiping down surfaces with decontaminating chemicals and collecting debris for disposal.

Much of the challenge comes from the fact that radioactive material can spread to the environment in several ways -- particularly when things go wrong -- making cleanup exponentially more difficult. For instance, radioactive particles can seep into groundwater, flow into nearby lakes, rivers and oceans, float through the atmosphere and even contaminate livestock and crops. Each type of environmental contamination requires a different response.

When radioactive material contaminates groundwater, organizations like the U.S. Environmental Protection Agency (EPA) oversee the construction of groundwater extraction and treatment facilities. If the soil itself is contaminated, on the other hand, it may need to be extracted and buried at a containment facility or even encased in concrete. When radioactive material spreads into large bodies of water or into the atmosphere, decontamination can be impossible. In such cases, fish, livestock and produce are closely monitored for increased levels of radioactivity.

Regardless of the type of contamination, mopping up radioactive materials is a dangerous task, and patience is sometimes the best approach to safely decontaminating a site. All radioactive material decays over time, eventually breaking down into stable -- and safe -- daughter elements. And while this process takes thousands of years for high-level radioactive waste, it occurs much more quickly for low-level waste like safety equipment and water used inside of a nuclear power plant. Accordingly, waste is often stored at the site where it was generated for years or even decades before it's properly disposed of.

Because the process of cleaning up radioactive material is so dangerous, it's highly regulated around the world. In the United States, federal agencies like the EPA, the Department of Energy and the Nuclear Regulatory Committee set safety guidelines, issue licenses to operate nuclear power plants and oversee any cleanup efforts.

To date, the Chernobyl disaster of 1986 stands as the largest disaster in the history of nuclear energy, exposing dozens of workers to intense levels of radiation. Within weeks, 28 of them had died after developing acute radiation syndrome (ARS).

Individuals with ARS immediately develop symptoms like nausea, vomiting and diarrhea, followed by a period of seemingly perfect health. Before long, however, victims revert to a state of serious illness that, depending on the amount of radiation a person received, can often lead to death. Because ARS is so devastating, workers exercise extreme caution when working with nuclear materials.

The decontamination of a site like Fukushima Daiichi isn't truly complete until the radioactive material from the site is safely disposed of. Spent nuclear fuel rods, for instance, remain dangerous for thousands of years after they've been removed from a power plant [source: U.S. EPA]. And while scientists and researchers are working tirelessly to find ways to neutralize the danger from the ever-growing amounts of nuclear waste generated every year, for now the only option we have is to store it. But where? After all, the volume of radioactive waste increases every second, with experts predicting the generation of an additional 400,000 tons (363,000 metric tons) over the next two decades [source: World Nuclear Association].

In the case of waste-emitting low-level radiation, the disposal process isn't markedly different from taking trash to the local landfill. While engineers have to be careful that such materials won't disperse under any circumstances or contaminate the local water supply, these disposal sites are typically located close to the surface.

Facilities designed to hold high-level radioactive waste, on the other hand, are much more robust. The Yucca Mountain facility in Nevada, for instance, cost more than $13 billion to construct and would store radioactive materials 1,000 feet (300 meters) underground in a network of shielded tunnels, but scientists and policy makers still debate its ability to safely contain its cargo [sources: Associated Press, Eureka County].

Constructing a nuclear waste repository is just the first step toward disposing of high level radioactive material. Next, the material must be placed into specially designed metal casks for transport. Because all manner of accidents can occur during transport, the casks are designed to withstand everything from 30-foot (9-meter) drops to 1475 degree Fahrenheit (802 degrees Celsius) fires [source: Eureka County]. These casks, constructed of stainless steel, titanium and other alloys, then make the journey from the site of origin to the nuclear waste repository where the casks can remain for thousands of years.

Not all countries choose to store high-level nuclear waste like the United States does, instead reprocessing the fuel and reusing it to generate more power. Still, reprocessing doesn't eliminate the need to store nuclear materials, making disposal a critical issue for every country using nuclear power

As you might imagine, cleaning up and disposing of nuclear waste is a costly endeavor. Britain's Nuclear Decommissioning Authority estimated the cost of cleaning up all 20 of the country's radioactive sites would top $160 billion, for instance [source: Macalister]. Still, proponents of nuclear energy say access to a reliable, clean and abundant energy source more than justifies the costs associated with maintaining and cleaning nuclear facilities.

How Much Is Too Much?

We all know that radiation is harmful, but the reality is that we can't escape some level of exposure. But how much radiation does it take to harm somebody? Background radiation and X-rays deliver far too little radiation to cause any harm, as does living near a nuclear power plant or even walking around the site of the Chernobyl disaster for an hour. In reality, only crews working directly with radioactive material ever receive enough radiation to endanger their health, and even then only in rare instances. Still, technicians working to stabilize the Fukushima Daiichi plant recognized they were directly in harm's way and continued pressing forward, illustrating true bravery for the sake of their country.