Gunpowder has long been the propellant of choice to launch a projectile from a weapon. But the fine gray powder does have three major limitations:

Is it possible to overcome these challenges? One solution is the electromagnetic rail gun, or rail gun for short. Using a magnetic field powered by electricity, a rail gun can accelerate a projectile up to 52,493 feet (16,000 meters) per second. And while current Navy guns have a maximum range of 12 miles, rail guns can hit a target 250 miles away in six minutes.

In this article, we'll discuss how rail guns work, how they can be used and the limitations of this technology.

Thanks to Sam Barros of PowerLabs for his assistance with this article. Sam, a Mechanical Engineering student at Michigan Technological University, has designed and built his own rail guns, coil guns and many other devices. 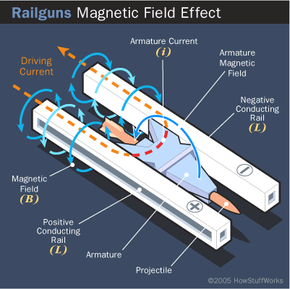 A rail gun is basically a large electric circuit, made up of three parts: a power source, a pair of parallel rails and a moving armature. Let's look at each of these parts in more detail.

The power supply is simply a source of electric current. Typically, the current used in medium- to large-caliber rail guns is in the millions of amps.

The rails are lengths of conductive metal, such as copper. They can range from four to 30 feet (9 meters) long.

The armature bridges the gap between the rails. It can be a solid piece of conductive metal or a conductive sabot -- a carrier that houses a dart or other projectile. Some rail guns use a plasma armature. In this set-up a thin metal foil is placed on the back of a non-conducting projectile. When power flows through this foil it vaporizes and becomes a plasma, which carries the current.

Here's how the pieces work together:

Like a charged wire in an electric field, the projectile experiences a force known as the Lorentz force (after the Dutch physicist Hendrik A. Lorentz). The Lorentz force is directed perpendicularly to the magnetic field and to the direction of the current flowing across the armature. You can see how this works in the diagram below.

Notice that the Lorentz force is parallel to the rails, acting away from the power supply. The magnitude of the force is determined by the equation F = (i)(L)(B), where F is the net force, i is the current, L is the length of the rails and B is the magnetic field. The force can be boosted by increasing either the length of the rails or the amount of current.

Because long rails pose design challenges, most rail guns use strong currents -- on the order of a million amps -- to generate tremendous force. The projectile, under the influence of the Lorentz force, accelerates to the end of the rails opposite the power supply and exits through an aperture. The circuit is broken, which ends the flow of current.

Rail guns require tremendous currents to fire projectiles at speeds of Mach 5 or higher. This presents problems for a traditional battleship because power cannot be diverted from the ship's propulsion system. In the Navy's next-generation battleship, the all-electric DD(X), producing this kind of current will be possible. To launch a rail gun projectile, power would be diverted from the ship's engine to the gun turret. The gun would be fired, up to six rounds per minute, for as long as required. Then power would be shifted back to the engine.

In theory, rail guns are the perfect solution for short- and long-range firepower. In reality, they present several serious problems:

A coil gun (or Gauss gun) is an electromagnetic launcher that offers a few advantages over rail guns. The "barrel" of a coil gun is a series of copper coils. These coils are energized sequentially, setting up a traveling magnetic field on the inside of the barrel. This magnetic field attracts a ferromagnetic projectile down the barrel. Since the projectile of a coilgun floats in the barrel and never touches the coils, it suffers less wear and tear, and these guns are completely quiet. Coil guns have been demonstrated to supersonic velocities, but they are not as efficient or as capable as railguns.

An artist's conception of a U.S. Navy aircraft carrierequipped with a rail gun.
Photo courtesy ONR

Rail guns are of particular interest to the military, as an alternative to current large artillery. Rail gun ammunition, in the form of small tungsten missiles, would be relatively light, easy to transport and easy to handle. And because of their high velocities, rail gun missiles would be less susceptible to bullet drop and wind shift than current artillery shells. Course correction would be important, but all missiles fired from rail gun artillery would be guided by satellite.

It would be more difficult to engineer small arm rail guns, mainly because of recoil. Recoil, the backward action of a firearm upon discharge, is determined by the momentum of the escaping projectile. Multiplying a projectile's mass by its velocity yields its momentum, which for high-velocity rail gun projectiles would be considerable. A portable rail gun that fires very small bullets may be the solution. A small bullet would limit recoil but still carry enough kinetic energy to inflict serious damage.

Rail guns have also been proposed as important components of the Strategic Defense Initiative, popularly known as Star Wars. Star Wars is a U.S. government program responsible for the research and development of a space-based system to defend the nation from attack by strategic ballistic missiles. Rail guns could fire projectiles to intercept the incoming missiles. Some scientists argue that rail guns could also protect Earth from rogue asteroids, by firing high-velocity projectiles from orbit. Upon impact, the projectiles would either destroy the incoming asteroid or change its trajectory.

Rail guns have some interesting non-military applications as well. For one thing, they could potentially launch satellites or space shuttles into the upper atmosphere, where auxiliary rockets would kick in. On bodies without an atmosphere, such as the moon, rail guns could deliver projectiles to space without chemical propellant, which requires air to function.

An artist`s concept of the interception and destruction of nuclear-armed re-entry vehicles by a space-based rail gun.
Photo courtesy Department of Defense Visual Information Center

Rail guns could also be used to initiate fusion reactions. Fusion occurs when two small atomic nuclei combine together to form a larger nucleus, a process that releases large amounts of energy. Atomic nuclei must be traveling at enormous velocities for this to happen. On the earth, some scientists propose using rail guns to fire pellets of fusible material at each other. The impact of the high-velocity pellets would create immense temperatures and pressures, enabling fusion to occur.

Many of these applications remain in the realm of theory, experimentation and development. Current rail guns do not generate sufficient energies to enable nuclear fusion to occur, for example. And it will likely be 2015 before an all-electric battleship uses a rail gun to launch projectiles at an enemy.

Still, the technology is promising. In 2003, the British Ministry of Defense hosted a one-eighth-scale test of an electromagnetic rail gun that achieved a muzzle velocity of Mach 6, or approximately 2,040 meters per second.

For lots more information on rail guns and related topics, check out the links that follow.

The Science in Fiction

If rail guns seem tantalizingly familiar, it's because weapons based on similar principles have been featured prominently in popular culture. In Robert Heinlein's The Moon is a Harsh Mistress, lunar colonists, in a struggle for independence use an electromagnetic launcher to fire iron containers filled with rocks at Earth. In the movie "Eraser," Arnold Schwarzenegger stars as a Witness Protection agent who has stumbled on a secret government plot to sell rail guns to terrorists. And in "Battlestar Galactica," the museum-era warship is armed with rail guns that use both electromagnetic and conventional technologies.

These fanciful weapons have also found their way into video games. Rail guns are featured in "Quake", "Metal Gear Solid" and "Red Faction."