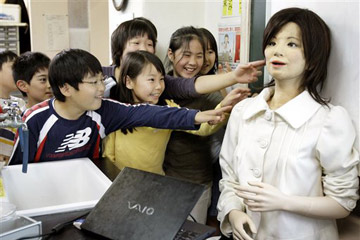 While we're able to make robots that can seriously creep us out like this robot teacher, we haven't been able to give them consciousness. See more robot pictures.
AP Photo/Koji Sasahara

The advancements we've made in computer science and robotics, two young disciplines, are impressive. Moore's Law is a good example of how quickly things can change. Gordon Moore observed in 1965 that the number of transistors that could fit on a silicon chip an inch (2.54 centimeters) in diameter doubled every year. That's a logarithmic growth pattern. While computer scientists would adjust the observation by lengthening the amount of time it takes before we can cram more transistors onto a chip, we've still shrunk transistors down to the nanoscale.

In robotics, engineers have created machines with multiple points of articulation. Some robots have an array of sensors that can gather information about the environment, allowing the robot to maneuver through a simple obstacle course. Honda's ASIMO robot can climb stairs and run. From manufacturing to military applications, robots are making a big impact.

Though computers and robots are more advanced than ever, they're still just tools. They can be useful, particularly for tasks that would either be dangerous to humans or would take too long to complete without computer assistance. But robots and computers are unaware of their own existence and can only perform tasks for which they were programmed.

But what if they could think for themselves? It's a common theme in science fiction. Machines become self-aware, changing the dynamic between man and machine. Could it really happen? 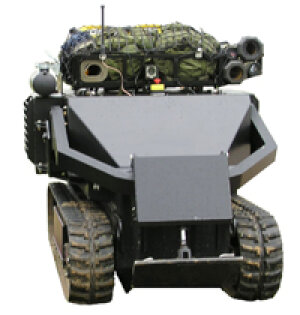