Robots Are People, Too 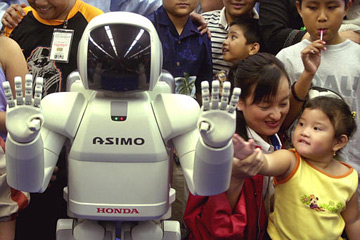 It's not hard to feel empathy for ASIMO even though ASIMO can't feel anything.
AP Photo/Aaron Favila

Artificial consciousness could give way to serious ethical questions. If machines become self-aware, could they react in a negative way to the situation they're in? Could machines object to being used as tools? Would they have feelings?

There's a lot of debate on the subject. Since no one has managed to create an artificially conscious machine, it's impossible to say what features it will and won't have. But if machines gain the ability to be self-reflective, it could require us to reconsider the way we think about them. At what point would a machine possess the sort of intelligence and consciousness that would necessitate us bestowing them legal rights? Or would machines remain tools and possibly consider themselves to be slaves?

Conscious machines form the basis of several apocalyptic science fiction tales. Movies like "The Matrix" or "The Terminator" envision a world in which machines have subjugated mankind. These scenarios rely on the concept of self-recursive improvement.

Self-recursive improvement refers to the theoretical ability of a machine to examine itself, recognize ways in which it could improve its own design and then either tweak itself or build new and improved versions of machines. Each generation of machines would be smarter and better designed than the generation before. Futurist Ray Kurzweil suggests that machines will become so adept at improving themselves that before long we would enter an age in which technology evolves at a blisteringly fast pace. We would have to redefine reality because it wouldn't resemble the present at all. He calls this the singularity.

In this world, what happens to humans? In some scenarios, we merge with machines. Artificial and real consciousness become something entirely new. But in other scenarios, the machines come to the conclusion that humans are no longer necessary. At best, the machines ignore us as they continue to build more impressive technology. In the worst case, machines wipe us out either as an act of self-preservation or in revenge.

These scenarios could all be moot -- we may never learn the secret to creating an artificial consciousness. It could be that consciousness is fundamentally physiological and that we can't simulate it artificially. But just in case we do figure it all out, you may want to be a little nicer to your computer.

Learn more about artificial intelligence by following the links below.