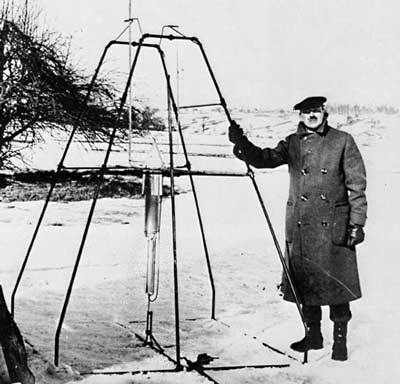 Dr. Robert H. Goddard and his liquid oxygen-gasoline rocket in the frame from which it was fired on March 16, 1926, at Auburn, Mass. It flew for only 2.5 seconds, climbed 41 feet, and landed 184 feet away in a cabbage patch.
Photo courtesy NASA

In 1926, Robert Goddard tested the first liquid-propellant rocket engine. His engine used gasoline and liquid oxygen. He also worked on and solved a number of fundamental problems in rocket engine design, including pumping mechanisms, cooling strategies and steering arrangements. These problems are what make liquid-propellant rockets so complicated.

The basic idea is simple. In most liquid-propellant rocket engines, a fuel and an oxidizer (for example, gasoline and liquid oxygen) are pumped into a combustion chamber. There they burn to create a high-pressure and high-velocity stream of hot gases. These gases flow through a nozzle that accelerates them further (5,000 to 10,000 mph exit velocities being typical), and then they leave the engine. The following highly simplified diagram shows you the basic components.

This diagram does not show the actual complexities of a typical engine (see some of the links at the bottom of the page for good images and descriptions of real engines). For example, it is normal for either the fuel or the oxidizer to be a cold liquefied gas like liquid hydrogen or liquid oxygen. One of the big problems in a liquid-propellant rocket engine is cooling the combustion chamber and nozzle, so the cryogenic liquids are first circulated around the super-heated parts to cool them. The pumps have to generate extremely high pressures in order to overcome the pressure that the burning fuel creates in the combustion chamber. The main engines in the Space Shuttle actually use two pumping stages and burn fuel to drive the second stage pumps. All of this pumping and cooling makes a typical liquid propellant engine look more like a plumbing project gone haywire than anything else -- look at the engines on this page to see what I mean.

All kinds of fuel combinations get used in liquid propellant rocket engines. For example: