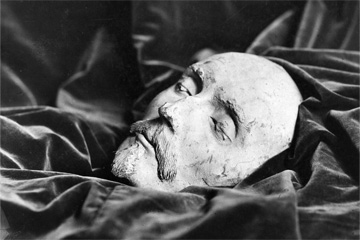 Is that English poet Ben Johnson or famous playwright William Shakespeare? Scholars weren't quite sure. Whoever it was, literary genius once lurked behind that now placid brow.
Hulton Archive/Getty Images

While not a truly medical practice, it was a physician who traditionally made the plaster mold of the recently deceased [source: Gibson]. A death mask needs to be made as soon after the person dies as possible -- in the first few hours after death, before bloating and the elements distort the character and expression on the face. Here's what the physician would do:

One of these artifacts will last as long as the nature of the substance it is cast from -- a bronze mask, properly cared for, will last centuries. Wax, while more lifelike in tone, is much more susceptible to the elements.

For now, it seems that death masks are -- forgive the pun -- a dying art. But there is one death mask that has helped save countless lives ...