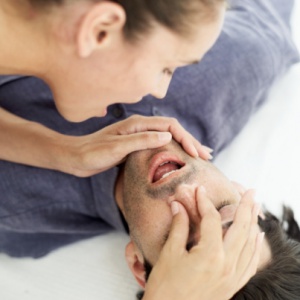 In order to teach people the process of CPR, Norwegian Asmund Laerdal wound up turning the famous and serene death mask of an anonymous Parisian into the face of the very first CPR dummy.
Stockbyte/Thinkstock

In 19th-century Paris, the face of an anonymous woman, preserved in plaster, intrigued the public. This woman, as the story goes, was a young lady from the country who had moved to the City of Light. She fell in love, but something went wrong. Her lover left her, and she saw only one way to drown her sorrows -- throwing herself off a bridge and into the river Seine.

The young lady's body was found, but no one came to claim to her. The mortician, so taken by her beauty and serenity in death, made a death mask of her. Like we discussed, a single mold can make many copies, and countless copies were indeed made. Her face became famous, spreading from the homes of Paris and across Europe. Who was she? Who was her lover, and what did he do? She became L'Inconnue de la Seine, the Unknown Woman of the Seine.

If this story sounds a little fantastic, that's because it probably is. The woman supposedly drowned, which bloats the body (and the face) before anyone would see her floating. Water, depending on temperature, also may accelerate the decomposition process. But the face of this anonymous woman is peaceful and serene -- she even has a slight smile like Mona Lisa's. Now add to the story that her body awaited identification in the morgue for hours, even days, and the nail is almost in the coffin. From what we learned earlier, nothing in this story fits with the biological process of a drowning death and the making of death masks. The final blow to the story is that death masks were only made for the wealthy or famous. This woman has remained anonymous. In all likelihood, she was a model for a life mask.

Fast-forward to 1960. Peter Safar, an Austrian doctor, is developing a new method for cardiopulmonary resuscitation, or what we know as CPR. Safar contacts Asmund Laerdal, a Norwegian toy maker. Dr. Safar knows he needs a way to teach his new method to the masses, so he contacted Laerdal to see what he could do.

CPR requires chest compressions and mouth-to-mouth resuscitation, and Laerdal knew a dummy would be the best way to practice this new method. This dummy would need a face -- nothing intimidating or frightening -- perhaps the face of a woman. While visiting relatives, Laerdal saw the mask of L'Inconnue de la Seine displayed in their home. Her face was serene, and Laerdal knew he had found the perfect fit for the CPR dummy.

After a few small modifications (like an open mouth and nostrils), a supposed death mask had become the face of life. Safar and Laerdal created the world's first CPR dummy, Resusci Anne. If you've ever learned CPR, there's a chance you were trying to revive The Unknown Woman of the Seine.

Death masks aren't a common cultural practice in Western society anymore, but they continue to be objects of fascination. People will continue to preserve the memory of their loved ones, whether famous and wealthy or not. These days we are more interested in remembering the deceased as alive and well, and photographs and videos faithfully record those better days. Technology continues to advance -- though nothing yet is quite as vivid and haunting as the death mask.

Another Reason for Anne

Asmund Laerdal had another motivation, aside from good business, to help Dr. Safar build a CPR dummy. He nearly lost his own son, Tore, to drowning.

I first learned about death masks a few years ago while I was researching a paper for a course on Russian opera. Thumbing through the pages of Tchaikovsky's biography, I stopped on a photograph of the great composer, or more precisely his corpse. The facing page featured his death mask, almost an exact mirror of the photograph. I couldn't tear myself away, and I stared at the death mask until I remembered I had deadlines to meet. Every now and then, I remembered the death mask but never really knew what it was. Writing this article helped me understand the strange plaster cast I saw. Death masks (and life masks) humanize the figures of history for me. I'm inspired to make my own life mask now, if only to scare my friends.