Can you really be double-jointed? 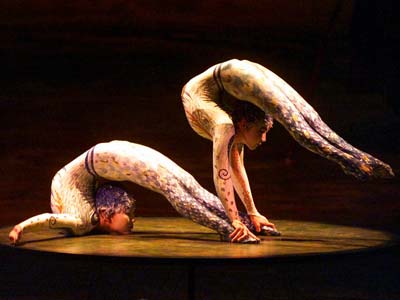 The freight cars with the hand-painted advertisements splashed across their sides have rolled to a stop and their occupants have disembarked: elephants, clowns, a strong man, trapeze artists, a bearded lady and other self-styled oddballs. The carnival has arrived in small-town America.

As people enter the gates, various barkers compete for their attention and their dollars. As a family with young children decides what to see first, some of their neighbors emerge wide-eyed from a small tent. Above the entrance, in small red cursive letters, is the word "contortionist."

Inside, a performance commences that seems to defy logic and reality. The contortionist begins slowly by lifting one leg and placing her foot behind her head. As she does, she seems to pivot 180 degrees on the leg that supports her. Now bending down and looking back at the audience, she lowers her suspended leg, clasps her hands behind her back and brings them over her head so that her unseparated hands are now in front of her.

As the show continues, it seems as if the performer is made of rubber, and not bone. Her movements and motions don't seem humanly possible to the family or the rest of the audience who almost protectively touch their own elbows, wrists and knees as the astounding show continues.

­As spectacularly strange as the show is, it's not entirely unique. Out of every 100 random audience members, about three people in it will have features that we commonly call double-jointed [source: Elliott]. So what does it mean to be double-jointed? Does it mean you have two joints instead of the normal allotment of one? Is there one joint that allows for normal motion, and another that allows for extra motion, or does one joint just not work right? Come on in, folks -- you won't see anything like it. For the amazing double-jointed discussion, step right in to the next section.