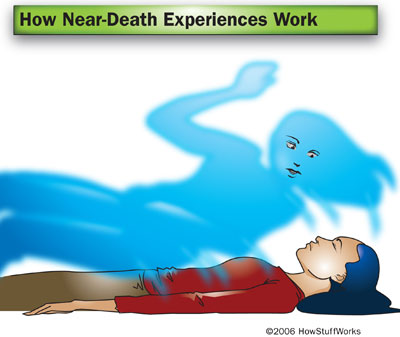 The most basic supernatural explanation is that someone who goes through an NDE is actually experiencing and remembering things that happen to their disembodied consciousness. When they are near death, their soul leaves their body and they begin to perceive things that they normally cannot. The soul goes through the border between our world and the afterlife, usually represented by a tunnel with a light at the end. While on this journey, the soul encounters other spiritual entities (souls), and may even encounter a divine entity, which many subjects perceive as God. They are offered a glimpse into another realm of being, often thought to be Heaven, but they are then pulled back, or choose to go back, into their earthly body.

Belief in astral projection connects NDEs with other forms of out-of-body experiences. Astral projection is the ability of an "astral self" to travel outside the body. In an NDE, this astral self, or soul, spontaneously leaves the body and travels freely to other places. A few cases of NDEs seem to offer proof that people actually experienced events from a point of view different from that of their earthly body. People who were unconscious, non-responsive, had their eyes closed or had been declared clinically dead have reported details of procedures done to them and people who were present in the room [ref]. Some NDE subjects who suffered from permanent blindness have reportedly been able to identify the color of a doctor's shirt, for example [ref].

For those with a strong belief in Judeo-Christian theology, NDEs represent proof that we have souls, that they continue to exist after we die and that Heaven and Hell are real places. Some believe that NDEs are the work of Satan, who seeks to exploit people's vulnerability at the time by appearing as "an angel of light." Satan's ultimate reason for this deception is unclear.

Other NDE theories are a bit more esoteric. Some believe that an NDE represents a psychic connection to higher-level intelligent beings from another dimension. These beings may be humans who have evolved their souls beyond the birth-death-reincarnation cycle, thus offering a glimpse of humanity's future as high-order spiritual beings. Sometimes, an NDE can even offer a literal view into the future, as in the apocalypse prophecy NDEs mentioned earlier.

It is interesting to note that non-Judeo-Christian religions have stories and descriptions of death that seem to explain many of the common NDE traits. Buddhism, for example, describes "the clear light of death," as well as demonic embodiments of moral failure. The soul's goal is to recognize both the light and the apparitions as projections of the soul's own nature, not something objectively real. If that happens, the soul may escape the birth-death-reincarnation cycle and reach nirvana [ref].

Next, we'll find out what science has to say about the NDE.

"The next thing I remember is seeing my body on a hospital bed with a doctor and nurses around...I felt so peaceful and I had no questions about the scene I saw. It so clear, more real than reality. I felt I was where I was supposed to be. The room was white, but there was a brightness all around me that was different from the room. I felt as though I was in the room (in the corner) but at the same time I was in open space. Everything was beautiful. There was no pain at all."

- Tracy Lovell, after a drug overdose suicide attempt (in "The Return From Silence" by Scott D. Rogo)