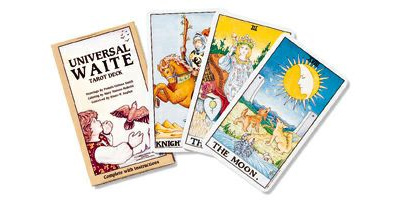 The tarot deck most commonly used in the U.S. is the Rider-Waite tarot deck.
Photo courtesy Consumer Products

There are many varieties of Tarot decks, and there is no standard number of cards across all decks. While the types of cards, the suits and their meanings are the same, the illustrations vary greatly. Decks are based on various themes such as nature, animals, fantasy, dragons, etc. The most common deck in the United States is the Rider-Waite deck, which was created in 1909 by A.E. Waite, a prominent member of the aforementioned occult group The Hermetic Order of the Golden Dawn, and published by Rider & Company. The artist was Pamela Colman Smith. This 78-card deck was the only readily available deck in the United States for many years, which is why some consider it the "definitive" tarot deck in the U.S.

Each suit has meaning regarding a specific approach to life. The cards within these suits are numbered one through 10 and also include the court cards — the king, queen, knight and page. The minor arcana cards represent the more minor, practical daily ups and downs in life.

The major arcana are not associated with the suits. They include the picture cards that represent principles, concepts and ideals. They are numbered one through 21, with the 22nd card (the "Fool") marked as zero. The major arcana cards represent strong, long-term energy or big events in some area of life.