Tarot Card History: Are They Really That Ancient? 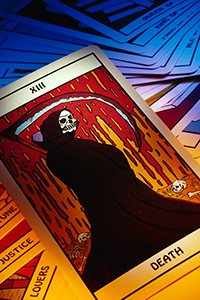 The death card in a Tarot deck can have multiple meanings, not necessarily grim either.
Steve Allen/Stockbyte/Getty Images

According to Tarot historian Tom Tadfor Little, traditional playing cards were first seen in Europe in 1375, having been brought over from the Islamic societies where they had been used for centuries before that. These cards were not, however, Tarot cards. At this point, he says, there is no evidence to show that Tarot cards had yet been created, which goes against many claims that ordinary playing cards evolved from the original Tarot deck.

It wasn't until 1440 that the cards that were most likely the origin of Tarot cards were first mentioned. In a letter from the Duke of Milan, there was a request for several decks of "triumph" cards to be used at a special event. The letter differentiated triumph cards from regular "playing" cards. It does appear, however, that the first Tarot decks were created as a game. There were four suits with cards numbered one through 10 and also court cards that included a queen, king, knight and page. The deck also included 22 symbolic picture cards that did not belong to any suit. The decks were used to play a game called triumph that was similar to bridge. In triumph, 21 of the 22 special picture cards were permanent trump cards. The game spread quickly to all parts of Europe. People began referring to as tarocchi, which is an Italian version of the French word tarot, around 1530.

In 1781, in France and England, followers of the occult discovered Tarot cards. They saw the symbolic pictures of the cards as having more meaning than the simple trump cards they were used for at the time. They used the cards as a divination tool, and occult writers wrote about "the Tarot." After this, the Tarot became a part of occult philosophy.

There are also those who believe that Tarot cards originated in Egypt. In some circles, they are thought to be the sole surviving "book" from the great fire that burned the libraries of ancient Egypt. In this theory, the cards are considered to be the hieroglyphical keys to life.

For more information on Tarot cards, Tarot card reading and related topics, check out the links that follow.