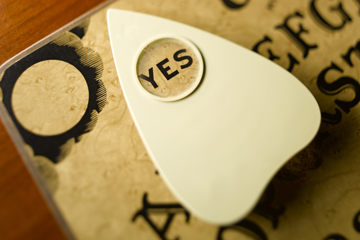 Closeup of an Ouija board.
Jeffrey Coolidge/Getty Images

If you've ever watched "The Exorcist," you'll know that Regan's troubles all began when she started to play the Ouija board.

Granted, that was just a movie. But there have been some weird happenings in real life attributed to the board. In 1913, spirits allegedly spelled out "CHINAMAN" for British author Sax Rohmer, and his famously mustachioed super-villain Dr. Fu Manchu was born. In 1920, a Ouija boom in the tiny town of El Cerrito, Calif. led to mass hysteria and landed several residents in an asylum. And in 1935, Nellie Hurd of Kansas City learned during a Ouija session her husband was having an affair, which he denied. She proceeded to beat him until he shot her.

Even more bizarre, James Merrill's 1976 Pulitzer Prize-winning book of poetry, "Divine Comedies," included the controversial "The Book of Ephraim," which was about the author's Ouija-assisted contacts with spirits, one being W.H. Auden.

Tales of sudden brilliance, insanity and death have circulated ever since 1891, when attorney Elijah Bond patented the "Ouija Egyptian Luck-Board" [source: Patent Museum]. Egypt probably had nothing to do with it – there's little real evidence of Ouija's reputed ancient roots, and the word is not in fact Egyptian for "good luck."

Over the next 70 years, ownership moved around -- from Bond to businessman Charles Kennard, who manufactured and sold the new toy (and made the Egyptian "good luck" claim), and then from Kennard to inventor (and former Kennard employee) William Fuld, who ran with it. Fuld filed numerous Ouija-related patents over the years and is credited with mass-marketing the Ouija board into a moneymaker. (He also said the name is a joining of the French and German words for "yes" – oui and ja. But who knows.) Fuld finally sold the rights to toymaker Parker Brothers (now Hasbro) in 1966 [source: Horowitz].

One thing is for sure, though: Ouija's creators had timing.