What if America had lost the Revolution?

Reimagining a Map of America 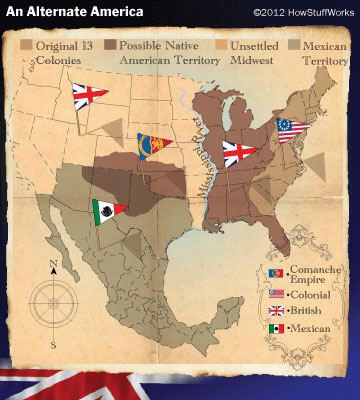 If the colonists had lost the war, there probably wouldn't be a United States of America, period. A British victory in the Revolution probably would have prevented the colonists from settling into what is now the U.S. Midwest. In the peace treaty that ended the Seven Years' War in 1763, the French conceded to England control of all contested lands to the banks of the Mississippi River. The British government wanted to keep that region wild and unsettled, so it could collect revenues from the lucrative fur trade that the French had developed, and issued a proclamation that year closing the frontier to settlers. If the Revolution hadn't eliminated that barrier, there might never have been an Ohio or Minnesota as we know them [source: Baack].

But if the 13 colonies had not won independence, the map of the continent might have been altered in other ways as well. Without a powerful federal government, the interior of North America and the western coast might be separate nations today. Additionally, there wouldn't have been a U.S. war with Mexico in the 1840s, either. So, that nation might have retained Texas, Arizona and other parts of the Southwest, and become vastly richer and more influential as a world power.

And without a rapid westward expansion in the 19th century, another beneficiary might have been the Comanche Empire that dominated the Great Plains in the early 1800s by developing cavalry and using firearms, which some historians say actually eclipsed some European nations in power and prestige. Had they not been conquered in the 1870s by the United States, it's conceivable that they might have grown even more formidable and might even have their own sovereign nation today [source: Hamalainen].