What if we ended war? 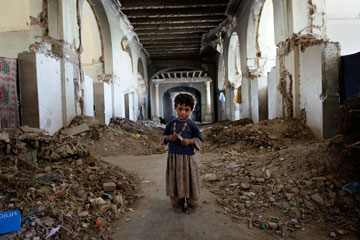 If you could push a button and end war on planet Earth, would you do it? How would a global farewell to arms change the planet, and how would we handle the realized dream of world peace?

For starters, we have to decide exactly what we mean by "war." Philosophers and politicians have spent thousands of years wrestling with the term, but for the purposes of this article, we'll ignore such concepts as "the war on drugs" and "the war on poverty." Instead, we'll define it as a state of armed conflict between states or nations.

So let's say you push that magic button and war as we've defined it ceases to be a possibility. Is it time to stick flowers in our hair and dance in the street? What happens next?

For starters, the militaries of the world wouldn't instantly become obsolete. After all, such forces engage in a number of activities that aren't related directly to armed conflict with other countries, like border protection, disaster relief and response to civil unrest. But if a global end to war means an end to even the potential for armed conflict with other nations, then militaries would swiftly prove overstaffed, overfunded and oversupplied.

The world's combined military budget currently stands at more than $2 trillion [source: GlobalSecurity.org]. In 2007, the United States spent the most of any nations, roughly $741 billion a year, which was 5.2 percent of its gross domestic product [source: GlobalSecurity.org]. So on one hand, the end of war would allow highly militarized nations such as the U.S., China and India to tighten their spending belt or use the money to fund other causes.

But what about jobs? Armies, after all, are made up of people. In 2010, the U.S. military employed more than 1.4 million active service members and 833,000 reservists [source: Reich]. At that time, another 1.6 million Americans worked in companies that support the military. Without wars or the potential for war, many of these people would have to fill other roles in society.

Then there's death to consider. According to a survey from the Institute for Health Metrics and Evaluation, approximately 378,000 war deaths occurred globally each year between 1985 and 1994. Of course, those years also saw the global population rise from an estimated 4.8 billion to 5.6 billion. Without war, individuals would still die from accidents, homicides, suicides at a normal rate, but it's easy to see how the end of war would at least marginally effect population levels around the world.

Plus, imagine all the free time we'd have. 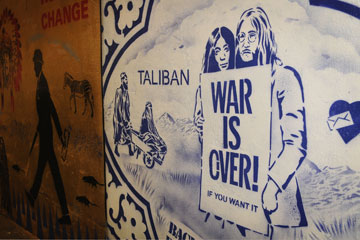 Is a world without war possible? Arguments fall on both sides, with some viewing armed conflict as an unavoidable part of human nature, and others seeing it as an addressable, solvable problem.

There is no single root cause of international military conflict. Instead, the conditions for war arise from numerous factors. For instance, some biologists explain war as part of our naturally territorial and aggressive nature. How do we fix that, short of evolving into a new species? Others look for the cause of war in human reason, both in its glaring absence and in its excess. Or is warfare a cultural phenomenon, just another behavior that people within a society practice, like raising families?

In a 2011 speech on the potential for world peace, the 14th Dalai Lama (the spiritual leader of Tibetan Buddhism) argued that outer peace depends on inner peace; the international turmoil of war stems from the inner turmoil of the human mind. Along these lines, new age spiritual teacher Ekhart Tolle predicts that the human mind will evolve to be less egocentric, thus ushering in a new era of peace.

For now, however, we can only look to nations that have managed to distance themselves from not only war but also its trappings. As of 2011, 19 independent countries exist without a standing armed force, including Costa Rica, which became the first country to formally abolish its military in 1948, keeping only a public security force for domestic matters.

Still, Costa Rica's Fuerza Pública (Public Force) demanded a 2007 budget of nearly $293 million and employs thousands of Costa Ricans [source: Pike]. It might not be a standing army, but that's roughly three times the military budget of neighboring Nicaragua [source: Rogers]. Plus, Costa Rica isn't above accepting a little military aid to fight the drug trade. In 2010, it approved a measure to allow the U.S. military to bring in 46 warships and 7,000 troops [source: Tenser].

Regardless, Costa Rica's demilitarized status has allowed its government to devote more funding to education and environmental conservation. In 2010, the New Economics Foundation added to Costa Rica's accolades, placing it ahead of every country in the world on its Happy Planet Index.

So what would happen if we ended war? Based on what we know, it seems like life would carry on just fine with at it. Should we grow nostalgic for our warring past, we've no shortage of war books, movies, plays, songs and video games to scratch the itch.

Was 1970s soul singer Edwin Starr right? Is war good for absolutely nothing? Explore the links on the next page and judge for yourself.