What If You Ate Uranium? 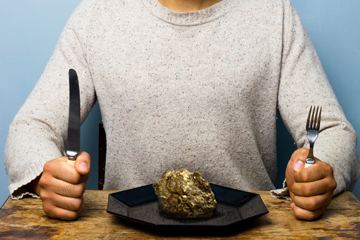 Scan the periodic table and you'll spot a lot of the same words you'd find on an FDA food label: potassium, iron, calcium. But look on the bottom row, and you'll see something you're more likely to associate with news about nuclear accords than a box of breakfast cereal: uranium. You can't help but wonder — what if you picked up a spoonful and started eating?

Let's back up and take a closer look at atomic number 92. Uranium is a dense, weakly radioactive metal that's naturally found in soil, rock and water. After mining uranium from the ground, experts manipulate its three isotopes to produce depleted and enriched variations; the former is less radioactive and used to make bullets and armor plating, while the latter is used in nuclear weapons and power plants.

But you don't have to work in defense manufacturing or in a place equipped with cooling towers to be exposed to uranium. In fact, eating uranium is one of the most common means of exposure. Crops like potatoes and turnips are among the most uranium-rich foods in our diet, but they aren't the only ones: According to the Environmental Protection Agency, the average person eats 0.07 to 1.1 micrograms of uranium per day [source: EPA].

The good news is you don't have to abstain from root vegetables anytime soon. That daily uranium consumption isn't nearly enough to be harmful, especially since your body has a hard time absorbing uranium as it is [source: Keith et al]. Between 95 and 99 percent of the uranium you ingest is excreted in feces, and you urinate 70 percent of the rest within 24 hours [source: ATSDR]. A small amount of uranium will stay in your bones anywhere from months to years after ingestion, but eating uranium is much less toxic than inhaling it.

But what if, instead of being a trace element in the food on your plate, uranium is the main course? You might not be surprised to learn that eating large doses of a radioactive substance leads to an increased chance of developing a cancer. But long-term concerns about radiation exposure pale in comparison to the immediate effects of chemical toxicity. Uranium mainly targets the kidneys: Damage starts to appear after taking in 25 milligrams, while intakes of more than 50 milligrams can cause renal failure and death [source: Argonne National Laboratory]. Additionally, studies of rats that ingest uranium over long periods have shown changes in brain chemistry [source: ATSDR].

Fortunately, while there's plenty of reason to believe uranium is lethal in high doses, there are no known human deaths from "oral exposure" to uranium [source: Keith et al.]. Still, instead of eating the kind of yellowcake that's made with uranium ore, you're better off sticking with the kind of cake you top with chocolate frosting.

How CERN Works
Has 'light as a feather, stiff as a board' ever worked?
What if we had two suns?