What if we ran out of fossil fuels?

by Gallagher Flinn
NEXT PAGE 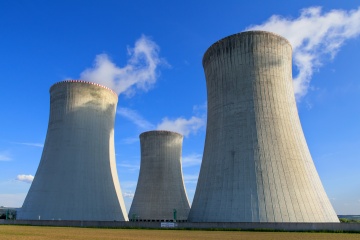 If we ran out of fossil fuels, the relatively cheap and efficient alternative would likely be nuclear power.
MartinLisner/iStock/Thinkstock

The danger surrounding fossil-fuel supplies has less to do with depleting them and more to do with what we can recover at a reasonable cost. Fossil fuels probably won't run out, at least not in the sense that they will be exhausted. Oil, coal and natural gas were here before us and will be here after we're gone. But that doesn't mean we can keep using them forever or even into the near future. We've harvested the low-hanging fruit — surface coal and the most accessible oil reserves are already going or gone. Now the question is whether mining technology can keep up with our desire. As long as it does, we'll have access to fossil fuels.

And that's a dangerous situation. Because the more we depend on fossil fuels, the greater the lengths we'll go to feed our addiction. Consider hydraulic fracking, a relatively new technology that lets us harvest previously inaccessible sources of natural gas by injecting water into shale at high pressures, releasing the natural gas trapped inside. While this practice has dramatically increased reserves and allowed natural gas to remain cheap, it's also helped ensure that further economic growth will be fossil fuel-dependent. Fracking also comes with environmental costs. The process uses enormous amounts of water, much of which is unrecoverable. It's even been linked to contaminated groundwater in Pennsylvania and earthquakes in Oklahoma [sources: Schultz, Bateman].

But let's say that instead of fossil fuels being depleted or people deciding mining causes too much environmental damage, the fuels get very expensive. In our scenario, global economic and population growth have driven demand to the point that technology can no longer keep up. Coal- and oil-fueled power plants shut down, electricity is rationed and a gallon of gasoline costs as much as a car. What are our options?

It might be nice to imagine the energy gap could be filled by renewable sources. But solar and wind power, for example, are relatively low-output, high-cost power sources; they couldn't replace fossil fuels as we consume them now. In the event of a catastrophic decrease in fossil fuel supplies, governments would more likely turn to cheap, efficient nuclear energy.

In 2015, 443 nuclear plants worldwide were providing about 11 percent of the world's electricity [source: NEI]. If we assume that nuclear plants could be responsible for 100 percent of electricity and that the output of individual plants stays constant, we'd have to build around 4,000 new plants to get up to current energy consumption levels. In our future scenario, a bigger population — including a more energy-hungry China, India and Brazil — might bump that up to 5,000 new plants.

Here's where things start to get a little apocalyptic. Nuclear power plants would keep us supplied with electricity, but they wouldn't solve all of our energy problems by a long shot. For one thing, our major transportation systems use fossil fuels. That includes trucking, rail and sea transportation of goods. Without diesel, large-scale international trade would pretty much shut down. While commuter transportation could conceivably convert to electric rail or electric cars reasonably quickly, renewable energy can't power enormous container ships. International trade would grind to a halt, and foreign goods would become exorbitantly expensive or unavailable. National economies that depend on international trade (which is basically all of them) would sink into a deep economic depression.

It gets worse. Remember how nuclear power plants were going to solve our electricity problems? There were 66 plants under construction worldwide in 2015, and each plant takes five to eight years to build [source: PRIS]. Unfortunately, we'd need another 4,944 plants to meet world electricity needs. And while it's a bit of a commercial secret how much a nuclear power plant costs, estimates run around $5 billion to $6 billion [source: NEA]. If we're conservative and assume that every plant costs $5 billion to build, meeting the world's energy needs would cost about $24.7 trillion. But with their shattered economies, most countries are too poor to build a single plant. Instead, nations that already rely heavily on nuclear power, such as France, Slovakia, Hungary and Ukraine, would be in an advantageous position not only to use and sell their expertise to build more plants but also to sell their own output to their neighbors.

Even with a hard drive toward nuclear power, the global economy collapses. And while it's hard to predict the results of the twilight of the Industrial Era, there are two places where we can make some guesses: food and the environment.

In 2009, the United States imported about 17 percent of its food [source: USDA]. There wouldn't be a lot of starvation, but cutting off global trade would radically change the way we eat. No more tomatoes from Mexico during the winter. No more apples from Argentina in the spring. No more sushi, unless you lived right next to the coast and owned a sailboat. The bulk of food production would have to be local. If you lived in, say, North Dakota, you'd get really used to eating beans. Plastics, which we rely on for packaging and preserving food, would be too expensive to use for transporting goods, and electricity shortages might make refrigerators too expensive to run. Big cities would lose population, as people moved to rural areas to live closer to food sources. Abandoned urban areas would be reclaimed by nature or turned into badly needed farmland.

Then things start to turn around. Burning fossil fuels causes plenty of environmental damage, and the consequent drop-off in carbon emissions would put a halt to climate change — provided we hadn't already ruined the climate. There also would be indirect benefits: Fish populations would rebound as the fishing industry shuts down. Water pollution from mining would end, and garbage production would essentially cease without the ability to produce nonbiodegradable products from petroleum. Small-scale solar, wind and water power generators would become standard necessities for in the U.S. Losing fossil fuels would be a painful process, but the result — the smaller, technologically advanced, agrarian society that would emerge — doesn't sound so bad.