What if we drilled into a supervolcano? 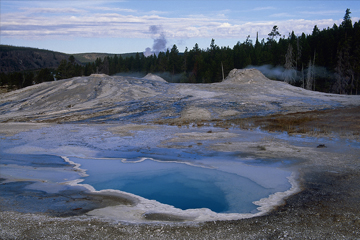 Drilling at the surface of a supervolcano isn’t likely to create any measurable seismic activity, but it could cause a string of explosions if the drillers happened to hit a hypothermal pocket.
Stan Osolinski/Getty Images

A supervolcano is a potentially explosive mountain that can pack more than 1,000 times the punch of a run-of-the-mill volcanic formation. Like other volcanoes, supervolcanoes erupt when pressure builds and molten lava stored well below the mountain's surface shoots out. If that seems like a bad thing, that's because it is. Experts predict that if the supervolcano lurking below the surface of Yellowstone National Park in Wyoming were to fully erupt, the explosion would kill tens of thousands of people immediately and spread a 10-foot (3-meter) layer of molten ash as far as 1,000 miles (1,609 kilometers) [sources: USGS, Lemas].

You might think that those who live near a supervolcano should move (now) and that those who can't move should do everything they can to steer clear of it. But Italian geologists have taken a different tack: They want to drill into the supervolcano at Campi Flegrei to take samples and test the geothermal energy coming from the belly of the beast to get a better idea of if and when it might blow. The strategy has caused a heated debate among experts about how to best handle supervolcanoes. We don't know for sure what drilling into a supervolcano might reap, but many geologists, physicists and international leaders have their concerns [source: De Siena].

Campi Flegrei sits under a large swath of Naples, the southern Italian city that's nestled against a bay and the supervolcano's better-known cousin, Mount Vesuvius. When Vesuvius blew in C.E. 79, it killed about 10,000 Neapolitans. That's just a drop in the bucket compared with what Campi Flegrei could do. A total of 30,000 people were evacuated in 1983 when researchers noticed that the caldera — an 8-mile (13-kilometer) wide crater at the surface of the volcano — was rising. The lava flow and avalanche of ash from a full explosion could endanger millions of people [sources: ICDP, Starr].

The International Continental Scientific Drilling Program, the folks behind the project to drill into Campi Flegrei, claim the project would have been pretty safe and incredibly useful. They said they didn't intend to drill very far into the volcano, and the rock samples they wanted to get their hands on could tell us a lot about what's going on further below the surface. This wasn't enough to convince local authorities, however, who shut down the project after a pilot hole was drilled in 2012 [sources: ICDP, De Siena,Lemas].

Opponents say that drilling into a supervolcano is kind of like getting into a cage with a sleeping great white shark and prodding it with a sharp stick. Well, maybe prodding it with a toothpick. Drilling at the surface isn't likely to create any measurable seismic activity, but the risk is that it could cause a string of explosions if the drillers were unlucky and happened to hit a hypothermal pocket. The gases released could, in turn, cause more explosions and even an earthquake or eruption [source: Starr].

The Lusi volcano, the world's largest mud volcano, killed 13 people in Indonesia and displaced another 30,000 when it erupted in 2006. Many observers have blamed nearby oil drilling for the disaster, while oil explorers blamed an earthquake that occurred roughly 175 miles (282 kilometers) away [source: Stiansen].

It may never be entirely clear just what drilling into a supervolcano would do. It looks like we're not going to find out anytime soon.

How the Hum Works
What if Earth had rings?
What does Einstein's famous equation really mean?