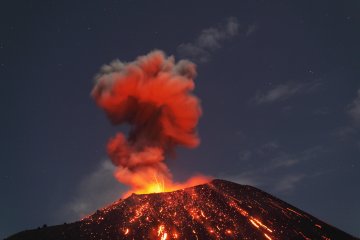 The Krakatau volcano puts on a MUCH smaller modern show than it did in 1883.
© Martin Rietze/Westend61/Corbis

In 1883, an Indonesian volcano erupted with the force of several thousand atom bombs, killing an estimated 36,000 people and producing what some call the loudest sound ever heard on Earth [source: Bhatia]. Krakatau (aka Krakatoa) echoed like distant cannon fire over 3,000 miles (4,828 kilometers) of land and ocean. It spewed enough gas and dust skyward to lower the average global temperature by 0.9-1.8 F (0.5-1.0 C) [sources: Geological Society of London; Tharoor]. To this day, its name is synonymous with cataclysm.

Next to a supervolcano, Krakatau is a snap cap. A packet of Pop Rocks.

OK, that's an exaggeration, and better suited to smaller volcanoes. But imagine 50 Krakataus or 1,000 Mount St. Helens erupting in a single location, blasting out as much ejecta in minutes as smaller volcanoes produce in years.

As much as we might fear earthquakes, tsunamis, wildfires and killer storms, in reality only a few natural events pack the power to knock global civilization on its heels. One is a planet-killing meteor. Care to guess the other?

Here's a hint: 74,000 years ago, Krakatau's neighboring island, Sumatra, saw a supereruption that some say nearly wiped out the human race. Although this hypothetical population bottleneck remains the subject of investigation and debate, we do know that the Toba supereruption produced 670 cubic miles (2,800 cubic kilometers) of ejecta, left behind a caldera measuring 19 by 62 miles (30 by 100 kilometers) and possibly jump-started a 10,000-year ice age [sources: Achenbach; Friedman-Rudovsky; Geological Society of London; Marshall; Tyson; USGS].

Scientists have identified around 30-40 supervolcanoes globally, 6-10 of which are potentially active [sources: Friedman-Rudovsky; Marshall]. The last to erupt was near Taupo, New Zealand, 26,000 years ago [sources: WTVY; USGS]. The largest we know of, the Fish Canyon Tuff event in Colorado around 28 million years ago, belched out 1,200 cubic miles (5,000 cubic kilometers) of deposits -- five times the amount usually required to join the volcanic Legion of Boom [source: Geological Society of London].

As we examine supervolcanoes in this article, we'll pay particular attention to the fitfully slumbering giant in the U.S.'s backyard: the hotspot beneath Yellowstone National Park, home to 2-3 supereruptions in the past 2.1 million years [sources: Achenbach; Robinson; Tyson; USGS]. And we'll hope that volcanologists have correctly estimated the frequency of these cataclysms at around one every 100,000 years because, right now, there's not much we can do about them.

What We Don't Know About Supervolcanoes Would Fill a Caldera 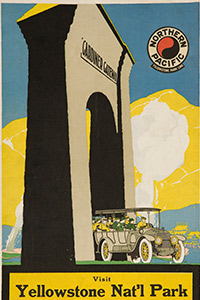 This old poster of Yellowstone gives little clue as to the geological wonders hidden inside the park's borders.
© David Pollack/Corbis

There are no universally accepted criteria for supervolcanoes. Volcanoes exist on a continuum, albeit a logarithmic one, so categorical edges tend to be fuzzy [sources: Achenbach; Geological Society of London; Tyson]. Consequently, estimates vary regarding the number of supervolcanoes, and of how often they blow their tops.

But a few common delineations do exist, including magnitude, the volume or mass of magma erupted, and intensity, the rate at which that magma erupts [source: Geological Society of London]. Magma is hot, molten material that comes from within Earth's mantle or crust and is forced out as lava during volcanic eruptions. It typically contains silicates, suspended crystals and dissolved gases [source: Oxford Dictionary of Science].

For such enormous and destructive wonders, supervolcanoes are surprisingly difficult to spot. Indeed, their size and power are part of the problem. Instead of building mountains, these giants blow them up. In fact, the Yellowstone National Park supervolcano was discovered partly due to a gap it created in the otherwise rugged landscape. Even then, its sheer extent -- 30 by 45 miles (50 by 70 kilometers) -- beggars the mind's ability to take it all in [sources: Achenbach; Geological Society of London; Tyson].

Add to that the vastness of time -- the hundreds of thousands to millions of years in which a caldera can erode, fill with lava from smaller eruptions or become a tree-lined lake -- and it's not hard to understand how supervolcanoes can hide in plain sight. But researchers remain stymied by yet another immensity, namely the scale of the processes that feed them -- mechanisms that reach deep into Earth and extend hundreds of miles across [sources: Friedman-Rudovsky; Geological Society of London; Marshall; Tyson; USGS].

So don't think of them as scaled-up volcanoes. Supervolcanoes are a phenomenon all their own, a deep process that we still struggle to comprehend [sources: Achenbach; Malfait et al.]. To better understand how they work, researchers turn to potential supervolcanoes like Uturuncu in Bolivia, which has grown half an inch (1.3 centimeters) per year for the past two decades, and to known hot spots of upwelling magma like the one beneath Yellowstone [source: Friedman-Rudovsky].

Yellowstone: The Supervolcano in the Backyard 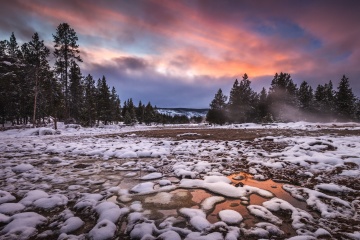 All quiet (for now) during a winter sunset in Yellowstone National Park.
© Michael Kittell/Corbis

Trace a line on the map from northern Nevada through southern Idaho and up into northwest Wyoming, and you'll follow an intermittent scar of volcanic mayhem extending 350 miles (560 kilometers) and stretching back 18 million years. The chain of volcanoes grows progressively younger as you move along this west-to east line, each one marking an area where magma pressure from a lone hot spot broke through. The chain, like the hot spot, dead-ends in Yellowstone National Park [sources: Achenbach; Geological Society of London].

Actually, it isn't the hot spot that moves. Rather, the North American plate grinds overhead at around 1.8 inches (4.6 centimeters) per year. Every so often, the hot spot bursts through. During its more than 2 million years beneath Yellowstone, it has produced three jumbo-sized events [sources: Achenbach; Robinson; Tyson; USGS]:

Today, the Yellowstone hot spot has assumed a mellower mien, as far as we know. It heats the park's famed geysers, hot springs, steam vents and mudpots, and takes some of the chill off of Yellowstone Lake -- itself partly formed from a collapsed supervolcano caldera. But it also occasionally causes the ground above to dome unsettlingly and remind us that a sleeping dragon is still, after all, a dragon [sources: Achenbach; Encyclopedia Britannica; USGS].

Although researchers monitor Yellowstone for earthquakes, ground deformation, stream flow and temperature, how much warning a supervolcano might provide before erupting remains unclear [sources: Geological Society of London; Tyson; USGS]. Earthquakes, of which Yellowstone has 1,000-3,000 annually, might warn of a volcanic event, but they might also release pressure and thereby help prevent one [sources: Achenbach; USGS].

Supervolcanoes also periodically release pressure via smaller eruptions. In the 640,000 years since Lava Creek, Yellowstone has experienced roughly 80 nonexplosive, lava-producing eruptions, and the next Yellowstone eruption will more likely be of the scale of Pinatubo -- far from insignificant, but not a supervolcano [sources: Achenbach; USGS].

But what if the dice don't roll our way? What might a supervolcanic eruption at Yellowstone be like?

The sheer size of supervolcanoes, combined with our lack of data concerning the types and quantities of gases they produce, make predicting their climate impacts difficult -- especially when you consider the complexity of Earth's climate system. But we know of tipping points in nature that can cause rapid, irreversible (or slow to reverse) climate alterations. Glacier growth and ice cap melting, for example, both function via feedback loops that can accelerate over time. Supervolcano Toba feasibly hastened an ice age by putting a thumb on the scale of one of these balances [sources: Achenbach; Friedman-Rudovsky; Geological Society of London; Marshall; Tyson].

Yellowstone and the Terrible, Horrible, No Good, Very Bad Day 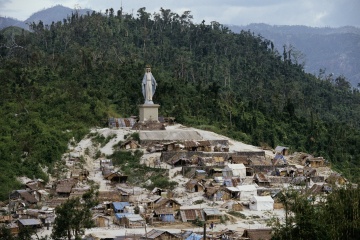 A statue of the Virgin Mary overlooks a village on Luzon Island five months after the eruption of Mount Pinatubo in 1991. Although considerably smaller in scale than a supervolcano, Pinatubo's 1991 eruption lowered temperatures in the Northern Hemisphere.
© Les Stone/Sygma/Corbis

Most supereruptions occur in areas that remain active over millions of years but enjoy a long repose period, so don't place too much confidence in Yellowstone's apparent calm. Broadly speaking, the longer the dormancy, the bigger the boom [source: Geological Society of London].

Like other supervolcanic areas, Yellowstone sits on a long-active tectonic zone, a weakened and thinned crust overlying a 2,500 F (1,370 C) magma dome rising from the upper mantle. This dome has melted and broken into the crust to create two magma chambers roughly 5-7 miles (8-11 kilometers) underground, each measuring 30-plus miles (48-plus kilometers) across [source: Encyclopedia Britannica]. These magma chambers are filled with an amalgam of magma, semisolid rock and dissolved gases like water vapor and carbon dioxide.

Over centuries and millennia, additional magma builds up, delivering more heat and pressure, pushing overlaying ground upward little by little. If the chamber receives a steady and substantial supply of hot magma, pressure builds in an often cyclical process called incubation. If it doesn't, then some material solidifies and sinks, removing pressure. The sheer volume of a supervolcano's magma chamber means that incubation requires a heat delivery rate 2-3 orders of magnitude greater than that of a traditional volcano [sources: Achenbach; Klemetti].

Eventually, overpressure creates fractures along the dome's periphery, venting pressure from the chamber. The gas-filled magma blasts skyward, raining ash and debris over hundreds of miles and releasing deadly pyroclastic flows -- fast-moving, thick clouds of gas, ash and rocks boiling away from the eruption at 1,470 F (800 C) – across tens of thousands of square miles [sources: Achenbach; Geological Society of London].

Thankfully, the odds argue against this happening any time soon. But another supereruption, someday, somewhere in the world, is inevitable. Maybe it's time we got started on that Mars colony after all.

It Doesn't Take Much

Though 50 times smaller than a supervolcano, Pinatubo (1991), on the Philippine island of Luzon, dropped surface temperatures in the Northern Hemisphere by up to 0.9-1.1 F (0.5-0.6 C). Tambora (1815) dampened summer temperatures the Northern Hemisphere for two years running. Krakatau (1883) caused an average of 0.9-1.8 F (0.5-1.0 C) drop in lower-atmosphere temperatures that lasted years. These averages likely hide more severe local effects [sources: Geological Society of London; Self et al.].

Supervolcanoes present a fascinating subject, but a difficult one to write about. On the one hand, we marvel at the tremendous scale revealed through their vast calderas and high-piled deposits, and we can intuit their climate-shifting capacity via ice cores, tree rings and microbes that alter their structure in response to climate changes. On the other, there's just so much we do not know about the contents of their magmas and the dynamics that drive their deep-welling plumes. Even seemingly harmless chemicals and materials might cause untold perturbations in the climate if dumped into the atmosphere in sufficient amounts. We just don't know.

And that's what's terrifying about these behemoths. Despite all our knowledge about volcanic and tectonic events, and even though supervolcanoes exist right here on Earth, in some ways they might just as well be extinction-level meteors from outer space. Our ability to predict them, or to do anything about them, is equally small, and in both cases we are left clinging to the cold comfort of long odds.

Do We Need a Category 6 for Hurricanes?
'Rainbow Lightning': One of Mother Nature's Rare Shows
10 Myths About Rainbows