What If the Yellowstone Supervolcano Erupted? 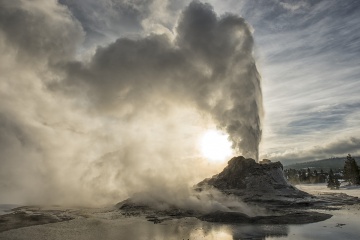 The eruption of the Yellowstone supervolcano would be disastrous, so it's good to know that it probably won't blow again any time soon.
© Jeff Vanuga/Corbis

Yellowstone isn't just an American treasure; it's the world's oldest national park. Established in 1872, Yellowstone stretches across 3,472 square miles (8,987 square kilometers) in three states. The park welcomes nearly 3 million visitors a year, who flock to the area to take in a stunning natural landscape that includes the Old Faithful geyser and a plethora of hiking trails, mountain peaks and hot springs. That's not to mention the variety of wildlife that call the park home, including grizzly bears, moose, elk, beavers and bighorn sheep.

Below the surface of this outdoors person's paradise lurks another natural wonder, however — one that has the potential to wipe the park off the map. The Yellowstone supervolcano is a massive source of granitic magma that rests miles under the park's surface. Although it's not likely to erupt anytime soon, a full explosion would be bad news for nature enthusiasts and a slew of folks anywhere near the park [sources: USGS, Lemas].

If the Yellowstone supervolcano were to erupt, it would happen like this: Heat rising from deep within the planet's core would begin to melt the molten rock just below the ground's surface. That would create a mixture of magma, rocks, vapor, carbon dioxide and other gases. As the mix amassed and rose over thousands of years, the pressure eventually would push the ground up into a dome shape and create cracks along the edges. As that pressure was released through the cracks, the dissolved gases would explode, emptying the magma in quick fashion across the park [source: Achenbach].

The eruption could be expected to kill as many as 90,000 people immediately and spread a 10-foot (3-meter) layer of molten ash as far as 1,000 miles (1,609 kilometers) from the park. Rescuers probably would have a tough time getting in there. The ash would block off all points of entry from the ground, and the spread of ash and gases into the atmosphere would stop most air travel, just as it did when a much smaller volcano erupted in Iceland in 2010 [source: Lemas].

Equally as frightening is the "nuclear winter" that some experts say could blanket the U.S. and other parts of the world if Yellowstone were to blow. Sulfuric gases released from the volcano would spring into the atmosphere and mix with the planet's water vapor. The haze of gas that could drape the country wouldn't just dim the sunlight — it also would cool temperatures. Falling temperatures would do a number on our food supply, decimating crops and throwing the food chain out of whack by leaving those at the bottom with little to eat. In fact, that's what many climate scientists believe happened in C.E. 535 after a supervolcano erupted in Java [sources: Browne, Weather Underground, Achenbach].

The good news is that an eruption of this scale isn't likely in any of our lifetimes. Yellowstone last erupted about 640,000 years ago, and the U.S. Geological Survey says the probability that it will blow its top again is about 0.00014 percent each year [source: USGS].

What Are Skyquakes?
How the Hum Works
Why Do We Have Leap Years?