How is volcanic ash made? 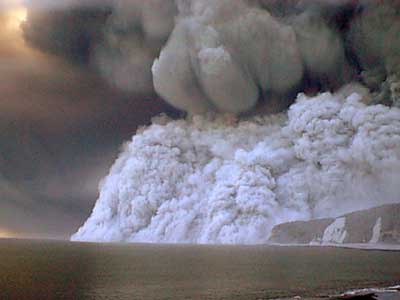 A pyroclastic flow from Mount Oyama on the Japanese island of Miyakejima crashes into the sea.
AFP/Getty Images

It starts out as just another afternoon in the shadow of a volcano, full of everyday commerce, humor and toil. Then suddenly everything takes a turn for the worse. The Earth shakes, and the air trembles with a monstrous explosion. Before you know it, the sky darkens and thick torrents of volcanic ash begin to fall from the sky, covering everything in a heavy, gray blanket of dust.

All that ash may sound like more of a mess than a real danger, but just consider the sheer destructive power of a pyroclastic flow. This mass of ash, gas and rock fragments can travel at speeds approaching 125 mph (200 kph). And with internal temperatures of 752 to 1,472 degrees F (400 to 800 degrees C), it can pretty much bake anything in its path.

Archaeologists studying the 79 A.D. eruption of Mount Vesuvius frequently discovered fractured skulls among Pompeii's dead -- signs of an exceedingly swift and brutal end. The heat from pyroclastic flow had simply boiled their brains until the pressure shattered their heads like eggshells. Pyroclastic flows can cause tremendous destruction, but they only occur in explosive volcanic eruptions (as opposed to the nonexplosive eruptions you might see in Hawaii).

Fortunately, most people haven't had to contend with the civilization-destroying, head-popping effects of a volcanic eruption. Armed with a better understanding of how volcanoes work, we've managed to read the warning signs and largely avoid the massive loss of life that volcanic activity inflicted on past centuries.

Nevertheless, ash fall still threatens widespread areas. Winds can carry the falling particles across thousands of miles, posing a risk to plants and animals wherever it falls. Following the 1980 eruption of Washington's Mount St. Helens, one­ of North America's biggest, ash fell as far away as Montana.

­B­ut how does volcanic ash form and what happens to it after the eruption? In this article, we'll blow the roof off these questions and learn just what this material is made of.

Mount St. Helens shoots a column of volcanic ash into the sky during its 1980 eruption.
InterNewtwork Media/Photodisc/­Getty Images

If you've ever observed a campfire, you've probably noticed smoke and floating bits of ash rising from the flames. These are purely a product of combustion: a rapid chemical process that produces heat and light. The smoke you see ascending out of an erupting volcano, on the other hand, consists mainly of tiny mineral particles formed by the explosive release of gases.­

Plate tectonic activity in the Earth's crust forms deposits of molten rock (or magma). This magma contains trapped, pressurized gases. If the confining pressure of the magma decreases or gas pressure within increases, the contents simply blast through to the surface.

Volcanoes are like a spewing bottle of soda. When gas bubbles rush to escape your soda bottle, they wind up carrying at least some of the soda with them. In the case of volcanoes, escaping gases carry magma up into the air. The sheer violence of the explosion shreds the rising magma into tiny particles -- much like how a sneeze emits moisture in tiny droplets. These minuscule pieces of magma then solidify in the air, becoming volcanic ash. We call flowing surface magma lava.

Volcanic ash consists of tiny, jagged particles of rock, minerals and volcanic glass. These fragments range in size from 0.00004 inches (0.001 mm) to 0.08 inches (2 mm), roughly the diameter of a grain of rice. Volcanoes spew larger fragments than this, but scientists classify them as cinders, blocks or bombs. Volcanic ash is hard and, due to each particle's jagged form, abrasive to the touch. The exact mineral makeup of the ash depends on what minerals were present in the magma.

­Once volcanic ash is airborne, three factors determine how far it will travel before falling back to the Earth:

Some of this volcanic ash mills around the air, joining other dust particles in the atmosphere as condensation nuclei, which water vapor condenses around to form clouds. Some violent eruptions can even add enough volcanic ash cloud cover to the upper atmosphere to drop global temperature by several degrees while the particles spread slowly over the entire planet. For instance, the 1883 eruption of Krakatoa lowered global temperatures by 2.2 degrees F (1.2 degrees C) for a year [source: The Independent].

Is that ash falling from the sky?

When volcanic ash descends back to the Earth, the effects can be mild or devastating. It all depends on how much ash was created by the eruption and your distance from the volcano. Ash may dust an area for as little as 30 minutes or fall for days, blanketing everything with several million tons of heavy powder. The experience can be disorienting, frightening and even deadly. ­

In large quantities, volcanic ash poses a significant threat to the environment. If you were to cover a section of your lawn with a tarp, you'd eventually kill the underlying plants. Likewise, a heavy layer of volcanic ash can deprive plants of sunlight, oxygen and necessary interactions with other organisms. It can even kill microorganisms living in the soil. With large trees, the added weight of volcanic ash can break limbs in the same way an ice storm does. In addition, volcanic ash often carries with it potentially poisonous chemicals from the eruption. High acidity levels in the ash can change soil composition, making it impossible for some species of plants to survive.

­The picture isn't much better for animals. Volcanic ash weighs down and immobilizes insects that have pollen-grabbing hairs on their bodies. Larger animals are susceptible to skin and eye irritation. If ash particles are less than 10 microns in diameter, they're also respirable. This means you can inhale them, resulting in a variety of short-term respiratory problems. Poisonous chemicals in the ash, such as fluoride, frequently pose a threat to livestock, coating not only the animal, but also their food and water supplies.

Massive quantities of volcanic ash inflict a lot of immediate damage, but in the long term, they can greatly enrich soil and ocean beds. This process may take weeks, months or even thousands of years, depending on the exact composition of the ash. But eventually, these particles of exploded magma work their way into our habitats, providing plant life with crucial organic carbon and nitrogen. Volcanic soils also hold a great deal of water, allowing for better-irrigated vegetation.

Large deposits of ash and other pyroclastic material may also eventually form into solid rock. Layers of hot ash often fuse into sheets of welded tuff. Much of the rest of it gradually ­becomes a part of our landscape. As such, the results of volcanic ash fall are all around us.

Meanwhile, inventive humans have found their own uses for the ash, incorporating it into ceramics, building materials, industrial abrasives and even toothpaste.

Volcanic ash can thoroughly disrupt cities and settlements. In addition to damaging agriculture and livestock, large quantities of ash can break down communication, hinder travel and destroy buildings. Ash adds additional weight to roofs, which can easily lead to their collapse. The particles are also particularly hard on machines and engines.

Sun's Twisted Magnetism Can Create Wonky Auroras
How to Prepare for a Flood
What Are Santa Ana Winds?