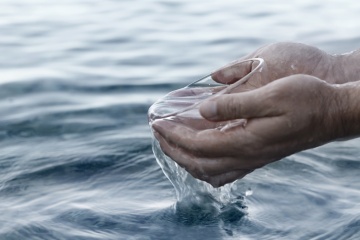 If you're consuming seawater, the results of osmosis are spectacularly disastrous.
Ivan Bajic/Getty Images

Have you ever been minding your own business on an elevator when an aggressively perfumed person stepped on? What happened? Did the Lady Stetson/Drakkar Noir stay on the person? Nope, it wafted all over the elevator so that everyone could smell it.

When it comes to diffusion and saltwater though, human cells have biological membranes, which can prevent salt from freely waltzing into our cells. Although our bodies can normalize sodium and chloride concentrations to an extent, dealing with extremely high concentrations of salt in the blood is challenging. That's because a cell's membrane is semipermeable — although sodium, chloride and other substances may not be able to easily diffuse in and out of the cell, water can. When the salt concentration is higher on the outside of our cells than on the inside, water moves from the inside to the outside of the cells to correct the imbalance. The attempt to equalize the concentrations of matter on both sides of a semipermeable membrane is called osmosis.

If you're consuming seawater, the results of osmosis are spectacularly disastrous. Remember the salinity of seawater is almost four times that of our bodily fluids. If gone unchecked, the net transfer of water from the inside of your cells to the outside will cause the cells to shrink considerably — and shrinkage is never good.

Unless you drink a lot of fresh water, the body's regulatory mechanism in this situation is potentially fatal. With seawater, the change in sodium concentration outside our cells is the main culprit. In order to regain an isotonic state, a must for cell survival, the body attempts to eliminate the excess sodium from its extracellular fluids. It secretes urine.

However, human kidneys can only produce urine that's slightly less salty than saltwater. So, in order to remove the extreme amount of sodium taken in by saltwater, we urinate more water than we actually drank. And dehydration sets in.

So, if you're guzzling seawater, you actually aren't taking in any water but are incurring a net loss, leading to depleted body fluids, muscle cramps, dry mouth, and yes, thirst.

The body tries to compensate for fluid loss by increasing the heart rate and constricting blood vessels to maintain blood pressure and flow to vital organs. You're also most likely to feel nausea, weakness and even delirium. As you become more dehydrated, the coping mechanism fails. If you still don't drink any water to reverse the effects of excess sodium, the brain and other organs receive less blood, leading to coma, organ failure and eventually death.

Of course, consuming small amounts of saltwater won't kill you. The take home message is clear, though: Salt and water are best consumed separately — and any salt intake should be accompanied by plenty of fresh water.

How is it that sea-loving marine life doesn't shrivel up and die from all the salinity? Those clever creatures deal with ocean salinity in two ways.